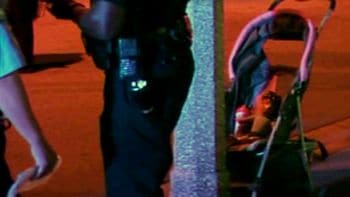 It has to be one of the most awful and unwanted experiences in anyone’s life, the sudden realization that they have suddenly gotten in the way of an oncoming large body of steel moving at a high acceleration at them with the full knowledge that if they don’t make a life or death decision as to how navigate the oncoming force they might not live to tell the story the next morning. Such was the case last night as one Californian mother suddenly found herself stuck on railroad tracks she was crossing with her two year old daughter in her stroller.

With the wheels of the stroller jammed on the tracks, the woman who had crossed the pathway when she ought not have (the arms were pointing down and it seems the mother was betting that she could make a quick dash across the passage before the train arrived) suddenly found herself in the precocious position of either getting out of the way of the train but letting her child die, possibly dying there with her child if she attempted to unjam the stroller and the train failing to stop or her not managing to free the child in time or as it finally occurred quickly tending to the jam but at the expense of her own life.

In the end one can only wonder what was going through the woman’s mind, whether on some level she understood what she was risking (when she chose to make the illicit crossing) and whether at the last minute she realized her daughter’s life was in grave danger that she had to immediately tend to that situation lest she commit the carnal sin of as mother causing the death of her own daughter. Then of course perhaps she thought to herself the visage of the following headlines: ‘Mother saves self after trespassing railroad tracks but her two year old daughter is killed after stupidly crossing tracks.’

Reflects one commuter, Joseph Avila, who was on the train when it struck and killed the as of yet publicly unidentified woman- ‘we didn’t even feel a thing.’

At present, the child is in the care of her grandmother. Such is the folly and irrational instances of life on an autumn Californian night….

As of Sunday afternoon the mother has been identified by the coroner’s office as Susan Dibene of Riverside, California.