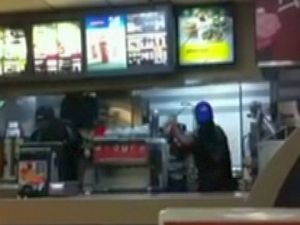 Here’s a story that’s causing some degree of controversy. It involves a McDonald’s worker, Rayon McIntosh a recently released felon on parole after serving 10 years for manslaughter and that of two 24 year old female customers who suddenly decide without provocation to jump the counter separating the cashier, McIntosh, and the two customers, Denise Darbeau and Rachel Edwards and attack him, before he in turn returns the assaults and then some. The then some part if you haven’t guessed it yet is what is causing the outcry.

It all begins when the girls turn to pay for their meal, they take out a $50 note, and give it to Mr McIntosh who then proceeds as is company policy to check if it is fake. Offended, the women start screaming and cursing at McIntosh, before deciding to both jump the counter and physically assault him.

As they begin hitting him, Mr McIntosh reaches for a metal pole/baseball bat (which begs the question, why would Mr McIntosh be carrying such an item in the first place, especially to work, or was this just something that found its way near Mr McIntosh’s person by sheer coincidence?) and begins to violently hit both women. As the video shows, customers begin pleading with Mr McIntosh to stop as he continues meting out swing after swing after swing (I am not exaggerating) on the girls who by now are on the ground. Apparently so vicious was his response that one of the girls has been said to be possibly be now facing possible permanent brain damage.

At present Mr McIntosh has been arrested and being held at the Manhattan Detention Complex on charges of felony assault with bail set at $40 000. The girls for their part have been charged with menacing, trespass and disorderly conduct.

All of which raises the following questions? Why did the two women react the way they did to Mr McIntosh’s gesture of scanning the $50 note? Didn’t they understand it was company policy or was there something else happening between these three that the video doesn’t show or was it simply a case of two young women bent on acting out with hostility and a hapless cashier worker simply defending himself?

On the surface one can sympathize with the cashier (who already has a thankless and unenviable job, but that really has nothing to do with the customers) who most probably finds himself continuously subjected to demeaning recriminations from highly strung customers and the demands of a low paying job in the fast food industry. That said, watching the video and the constant swings he takes at these women who are on the ground, the viewer is left  wondering if Mr McIntosh is relishing in this and on some level actively taking the role of aggressor?

At some point Mr McIntosh could have responded by seeking the attention of the manager to disengage the two women, plead the assistance of fellow workers to subdue the women or as he chose, continue physically engaging his unarned attackers. What becomes extremely problematic is  the cashier’s belligerent repeated beating of these two girls who are now on the floor, soundly knocked off guard and the screaming of customers who by now are fully aware that Mr McIntosh has entered no man’s territory where for a moment we could see him being the victim but now we are left aghast as he takes on the very active role of attacker himself.

Whether this is a reflection of a personal fault on behalf of Mr McIntosh, the conditioning that comes courtesy of a ten year stint in jail, the degenerative aura that comes from visiting an impersonal fast food vendor or simply the unresolved trauma of a man who has somehow confused and armed himself against what he perceives to be a hostile world is up for debate. But what oughtn’t be up for debate is the very serious nature of these two girl’s injuries.