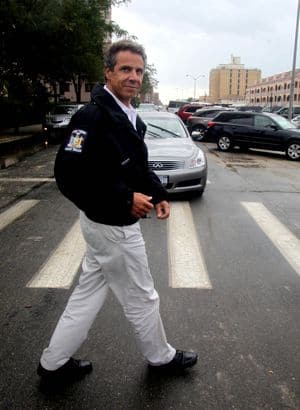 We fled Southampton Friday noon on the last LIRR train out. Fearing the impending storm and the havoc it might wreak on our eighteenth floor apartment and terrace, we thought it judicious to prepare for the worst.The storm came and went without living up to the hype that caused the massive shutdown of gotham (probably a dress rehearsal for future catastrophes and vindication for Mayor Bloomberg’s post blizzard snafu).

On Sunday afternoon, we decided to motor east and see the real consequences of what was now a mere tropical storm. The first stop was Broad Channel Queens where we encountered a rather large house trailer that had been the victim of a huge fallen tree. The shell shocked owners paced around the crushed vehicle in a state of shock as gawkers looked on. 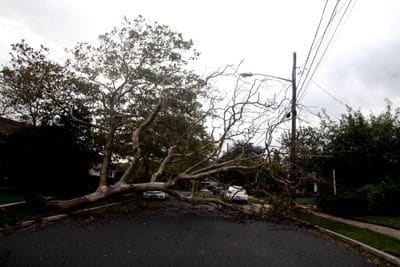 Next we visited Rockaway Beach where several moronic drivers  tried to drive on the soggy sand in non four wheel drive vehicles suffering  deep consequences. The wind gales blew painful blasts of sands on our naked legs and ankles but we persevered.

Finally we crossed the causeway into previously evacuated Long Beach where numerous media outlets with satellite remote trucks were covering the meteorological mayhem. The lifeguard station building had broken from its moorings and was crashing into the boardwalk in the heavy surf. 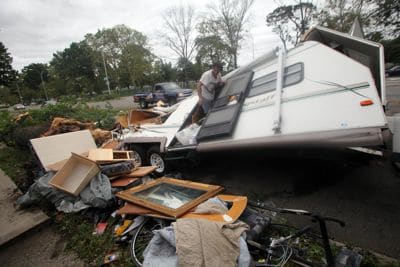 Next we noticed a seemingly presidential motorcade making its way toward the assembled boardwalk crowd. Miraculously it was our suave and unflappable Governor Cuomo assuring us that the situation was well in hand and life on Long Island would eventually normalize. Praise be!

Hurricane Irene. The sudden sex celebrity without much bang.

Who would of thought in moments of hysteria watermelons mattered so much?

Did you notice a shark swimming down the freeway? Welcome to Hurricane Irene…