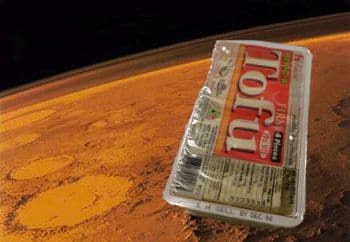 I was not aware that we were in the position to take dibs on planets yet, but hey, I’m fairly certain Oprah owns her own miniature world of man-made, continent-shaped islands, so why not?

It seems that PETA reps, via Mogulite, have sent an open letter to Elton Musk, the SpaceX man who ambitiously plans to land a shuttle on Mars by 2018 (but the apocalypse is only a year and half away!), petitioning him to make Mars an all-vegan planet (wouldn’t that hurt the planet’s tourism though?)  Here’s their case:

The opportunity to colonize Mars means a chance to make a fresh start, especially now that we’ve degraded our own planet by treating our fellow animals like disposable widgets, filled the air with pollution that will soon make the sky in “Soylent Green” look clear, and populated the Earth with so many humans that the premise of “Logan’s Run” starts to look practical. We can get off on the right foot on our new biosphere by ensuring that SpaceX crafts traveling to Mars are stocked only with vegan food and that Mars’ colonists commit to enjoying an animal-free diet once they’ve arrived.

Now these PETA-ers are pretty savvy with the references, so allow me to elucidate.  “Soylent Green”: 1973 Charlton Heston dystopian vehicle—depleting resources, yada, yada, yada. “Logan’s Run”: sci fi novel where scarce resources call for killing off people of a certain age—quite a practical policy, if you ask me. “Disposable widgets”: ya got me there.

Colonizing Mars can give us the opportunity to learn from our mistakes on one planet and create a just civilization on another. Ensuring that Mars is a vegan planet (rather than importing animal products from Earth or creating factory farms on our new home) would protect animals from the horrors that they endure in the meat, egg, and dairy industries.

Bravo, PETA, for appealing to a man as powerful as Elton Musk, self-appointed ruler of Mars. Thank god there is no meat on Mars already, so there’s that.  And way to get in there early before all the other interest-groups start pleading their cases for how to run Mars.

Like it or not, Mars is the future, and if you’re unsatisfied with the way things are down here on Earth, here’s you opportunity to do something about it.  Forget voting.  Forget protests and riots.  Forget Earth.  Set your sights on the celestial bodies.  There’s a place for us, up there. Thanks, PETA, for plowing the way.