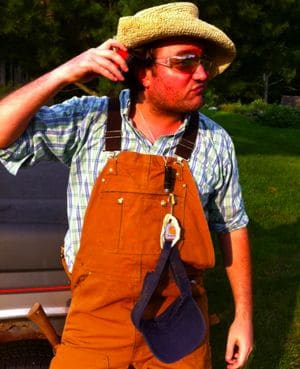 Mork Encino, a Utah man down on his luck but quite savvy with self-promotion, is offering predatory hunters a chance at live, human prey.  For a 24-hour session, Encino—who claims that he is very, very silly serious about this—will attempt no self-defense, only the elusion of hunters behind trees, hills, or using the “strategic fetal position” so he can earn the big bucks.

Huntme4sport.com: I seek hearty gents who fancy themselves sportsmen and bored of the usual game. I am a new breed of prey with thick pelt and smooth hide. I’m faster than a wild turkey, smart as any GODDAMN wild boar and willing to make the ultimate sacrifice for the monetary health of my family.

Are wild boars known for their intelligence?  Courage, maybe.  Anyway, Encino’s idea is quite original, and it seems to dramatize some sort of class-rivalry:

And knuckleheads or candy asses? Well, they need not apply. They can kick rocks and kiss grits and whatever else. I’m looking for a true goddamn Money Bags, okay? 10K is nothing to these boys. They leave tips on restaurant checks like that. They drop that type of scratch just because. They’ll pay that money just to rub it in my FACE and show me how meaningless it truly is to the likes of them.

While it is unclear whether this is a hoax or not, it is also doubtful that anyone will go through with this (not to mention, is it legal?)  I understand an unconventional approach to a job search, and given the interest Encino’s offer is generating, he might end up landing a job that does not risk his death.

As he told the Atlanta Journal-Constitution, “’I’ve had a variety of offers, none of which I’ve been comfortable accepting. As I’ve said, this is not my dream job. There’s obviously no longterm in it. This is just something I’ve resorted to in order to make others aware of my situation. It’s a job application, man. And a damn good one if I may say so’”.

Unemployment drives people to desperate measures, but is anyone in our society feeling the bloodlust to hunt people?  Encino capitalizes on media attention with this lark, but can we read his actions as having something to do with distribution of wealth?

Maybe Encino will land a job in social media.  He’d make a killing. But then again according to my editor he thinks he might try this tactic next Christmas when he has to come up for all that Xmas shopping money, that or his nagging landlord….