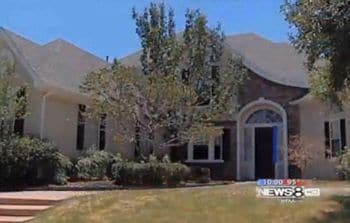 Knowing the law can really see you steal get a bargain…

Kenneth Robinson is about to become the proud owner of a $300 000 mansion, except for his troubles he will only have to put down a grand sum of $16. Yes, $16! How you wonder? Let’s all turn to our archaic Texan law books and find out why and how…

dailymail.co.uk: The house had been in foreclosure for more than a year and its owner walked away. Then, the mortgage company went bust.

After months of research, Mr Robinson used the obscure law ‘adverse possession’, filled out some paperwork costing just $16, and moved some of his belongings into the home.

Under the law, if someone moves into an abandoned home they have exclusive negotiating rights with the original owner.

If the owner wants them to leave, they have to pay off the mortgage debt on the home and the bank has to file a complicated lawsuit to get them evicted.

Complicated lawsuit? And how long would that take? Servicing the mortgage debt on the house. No thanks. But Mr Robinson like most ambitious business people is betting on the one thing that will make it all worth his while…

Mr Robinson believes that because of the cost required to move him out, he will be able to stay in the house. Under occupancy laws, if he remains there for three years he can ask the court for the title.

Which is to say it’s not bad work if you can finagle get it.

To date Mr Robinson has filled out a form with the Denton Country courthouse which effectively gives him ownership of the abandoned property.

Currently the house has a few pieces of furniture in it (which he could probably sell to recoup his ahem $16 ) but no running water or electricity.

For his troubles Mr Robinson has had to construct a no trespassing sign after neighbors called people to notify them that he was breaking in. Fortunately for Mr Robinson he was able to produce documents that he was a legal occupant as well as find a key on the grounds to the house.

This unfortunately has not pleased neighbors who have come to perceive Mr Robinson as nothing more than a squatter, but since home ownership is a civil matter they can not have the police remove Mr Robinson. Of course who can begin to file civil actions is the last legal holder, the mortgage company, but that may prove to be a trifle complicated seeing as they went bankrupt and no longer legally exist. 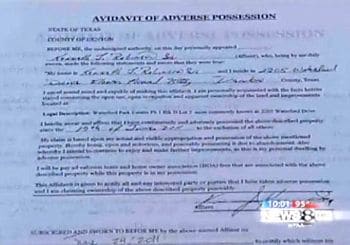 Bemoans one neighbor, Leigh Lowrie:  ‘What paperwork is it and how is it legally binding if he doesn’t legally own the house? He just squats there.

And in a way Mr Robinson has bought his house. For the measly sum of $16.

Isn’t it time you did your legal homework more often too? 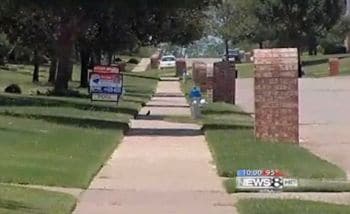