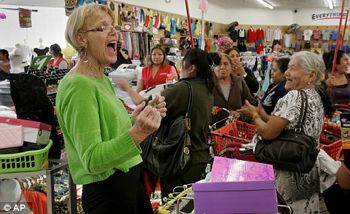 How many times have you gone to a store, looked around at all the items and only wished you had enough money to buy everything you could possibly take home with you?

dailymail.co.uk: It’s every shopper’s dream come true – that someone else will pick up the tab for a wild spending spree.

Which was exactly what happened when a rather eccentric woman swept into a discount store and told customers to fill their trolleys and she would cover the cost.

Claudia Smith, 66, went into an Everything A Deal store in Oceanside, California and bought $2,200 worth of clothing for other customers.

But once wasn’t enough, so Claudia Smith had to come back the next day and spend her money again.

She then turned up the following day to spend a further $5,000 on complete strangers – hundreds of whom had waited since the early morning for her to arrive at 4pm.

She told local station 10News: ‘I’m just recycling my money over and over and guess what’s happening to my credit card? Whoosh!’

And what prompted this display of charity?

She said that she had lived in San Felipe, Mexico, for several years and wanted to buy things for ‘poor Mexican women’.

And how did customers initially react when Claudia Smith announced that she was buying clothes for everybody?

To date it hasn’t been revealed why Claudia Smith did what she did or where she found the money for it, but perhaps we can take the following as a clue:

She told crowds outside the store: ‘Here I am — happy, joyous and free!’

How terrofying and liberating it must be to spend money you dont necessarily have not on yourself but on others around you? Or can we wonder was this just the extreme course of actions for a woman who for now has decided fulfilling a fantasy for others is more satisfying than her own immediate satisfaction? Not that she didn’t derive some sort of arbitrary power for at least an hour whilst she was taking out her credit card to buy things for a group of people she had never met in her entire life.