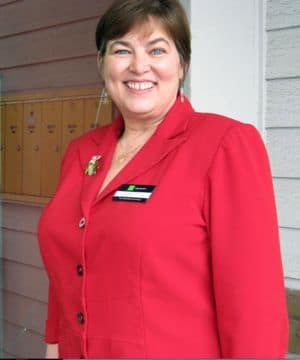 Karen Butler has never been to Europe and has spent much of her life in Oregon. But when she woke up after some very necessary dental surgery- her dentist found to his and her surprise Karen now speaking with a foreign accent. A British one that is….

azcentral: A year and a half later her “foreign” accent remains, and her story has traveled around the world.

The 56-year-old tax consultant from Toledo, Ore., has found her life transformed by the dental procedure, which left her with dentures, and — depending on whom you ask — an Eastern European, Swedish or British accent.

Personally if I had to have a choice with which new accent I’d come up with after surgery it would have to be Swedish one. But then again that’s maybe because I have a faux British already. Which is to say Karen is in good company…(see video below- it’s too unbelievable for words…)

Butler had all her top teeth and front bottom teeth removed in November 2009 because of gingivitis. A week later the swelling had gone away, but she still sounded strange. Her dentist told her she just had to get used to her new teeth.

But as weeks stretched on with no change, Butler did some online research. She diagnosed herself with Foreign Accent Syndrome, a medical condition with only a few dozen documented cases.

Foreign accent syndrome? Isn’t that something that happens to interns and college exchange students for about 3 weeks upon returning home after a stint on the Continent (even if speaking with a French lilt was getting you more action that you could have ever imagined possible…)?

And in case you’re wondering how this can all be possible there’s this:

The syndrome is often the result of brain injury; though uncommon, most neurologists will see at least one in their career, said Dr. Helmi Lutsep, professor and vice-chair of the Department of Neurology at Oregon Health & Science University. Sometimes a person just sounds slightly off; other times there may be a more dramatic sounding accent, Lutsep said.

“We don’t know exactly how or why it happens, but it simply affects rhythm of language,” Lutsep said. “I’m absolutely convinced this is a real phenomenon. These people are not making it up.”

Which begs the question- is Karen just having us on, or did dental surgery really affect the way she sounds?

Butler believes she hasn’t had a stroke or any brain trauma. She said she has tried, but hasn’t been able to get a brain scan because she said her medical insurance will not cover it.

But just in case you think Butler will never hear herself with her original accent again- comes this:

Every now and then, Butler’s daughter Cindy Miller, 36, calls her mom’s cellphone just to listen to the voicemail. Butler hasn’t changed it since the procedure.

“After all this time I like to hear it. I like to remember what it was. What my voice sounded like,” Butler said. “I don’t feel different inside at all. I’m the same old me I ever was.”

Personally if you ask me and the chipmunks huddled in the corner practicing their begging techniques in a cockney accent- it all makes sense- after all there’s a reason why British people sound the way they do- they all have bad teeth.

Never mind Karen, we’re betting your next dental operation should you ever need it- will get you sounding like an Aussie…(like this author).