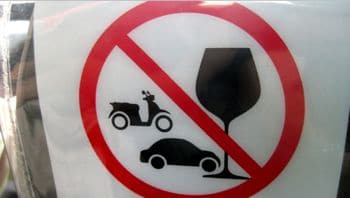 Will Sandra Uher ever manage to get sober?

Having a drink here and there can be fun. It’s when you turn up every day having a drink when it is no longer fun. That said, let’s turn our attention to the affairs of one drinker who seems to be having problems with her drinking excursions. Literally…

dailyherald: An Elgin woman charged with her sixth DUI had her bail revoked this week when she showed up for court intoxicated, court records show.

Sandra Uher, 54, of the 1200 block of Maroon Drive, was remanded to Cermak Hospital, which is part of the Cook County Jail, for evaluation on Thursday.

And what did evaluation conclude?

Uher’s latest arrest occurred in March after she ran a stop sign at Shales Parkway and Summit Street in Elgin and crashed into another car, police said. No one was injured in the accident. If convicted, Uher could face six to 30 years in prison.

From cursory observations one may be able to deduce that Sandra Uher has a lot on her plate and like most things that can overwhelm us- there is usually one of two options one can follow. One can own up and get help or if one is inclined one can continue on their merry road to self destruction. Of course since Sandra Usher likes to drink and drive that would also imply the potential destruction of other people too.

Her latest DUI arrest follows several previous DUI convictions. Uher was convicted of DUI in 2005 and sentenced to 18 months in prison. She received two DUI convictions in 1999 for separate offenses that occurred on the same day. And she was sentenced to supervision for drunken driving in July 1997 which became a conviction in May 1999. Uher also was arrested on charges of DUI two years ago in Kane County.

Personally me thinks Sandra Uher was a tad nervous when she turned up to court, after all she was way over the speeding limit, loaded to the hilt and coincidentally driving whilst her lesson was revoked. So can you really blame Sandra Uher downing a couple before she made it to court?

If convicted, Uher could face between six and 30 years in prison.

One day Sandra Uher will eventually come to terms with her demons, or then again perhaps she just never might…