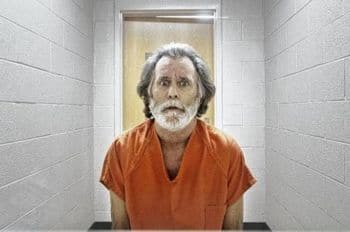 It could have easily come out of a scene from a Franz Kafka novel, but what James Richard Verone did on June 9th 2011 belies more about the peril of the US healthcare system and what people like Mr Verone feel they are compelled to do in order to get what they need when all other routes have been exhausted.

gastongazzette: James Richard Verone woke up June 9 with a sense of anticipation.

He took a shower.

Then robbed a bank.

He wasn’t especially nervous. If anything, Verone said he was excited to finally execute his plan to gain access to free medical health care.

If you think this is a joke, you should stop laughing now. But then again if you think this approximates the bizarre nature of what it has become to live in America today then feel free to continue ruefully crying smiling.

“I prepared myself for this,” Verone said from behind a thick glass window in the Gaston County Jail Thursday morning.

Verone spoke calmly about the road that led him to a jail cell he shares with a young man arrested for stealing computers.

The 59-year-old man apologized for squinting. He hadn’t gotten his eyeglasses returned to him since being arrested a week ago.

He smiled from the other side of the glass, sometimes gesturing with his hands. A plastic, red bracelet with his mug shot clung to his left wrist.

Until last week Verone had never been in trouble with the law.

Now he hopes to be booked as a felon and held in prison where he can be treated for several physical afflictions.

With his back against the wall, Mr Verone felt compelled that his only one remaining option was to break the law so he could finally get the healthcare assistance he finally needed, because at least a convicted felon is entitled to healthcare where as a free man who has no means of paying for the cost of health care will sometimes be forced to come up with other alternatives.

But before you go thinking Mr Verone is a capricious man looking to take advantage of a broken system one should bear in mind that for most of his life he has played text book with the rules. He held a job with Coca Cola for 17 years before that job ended (one can safely assume Mr Verone was not offered a pension or a health care benefit as an exit payment, unlike something many senior executives can expect to receive). After that he got another job as a delivery man before that job ended and yet another  job as a convenience store clerk which led to him eventually incurring physical pains. Something on his wages and lack of health insurance could hardly attend to.

Nevertheless Mr Verone applied for disability and early social security, instead all he got was food stamps. By then his physical pains now included a protrusion in his chest, arthritis, carpal tunnel syndrome. Ailments which he had no way of dealing with until Mr Verone finally decided to exercise his last resort.

A couple of months ago Verone started weighing his options.

He considered turning to a homeless shelter and seeking medical help through charitable organizations.

Then he had another idea: commit a crime and get set up with a place to stay, food and doctors.

As his bank account depleted and the day of execution got closer, Verone sold and donated his furniture. He paid his last month’s rent and gave his notice.

He moved into the Hampton Inn for the last couple of days. Then on June 9 he followed his typical morning routine of getting ready for the day.

He took a cab down New Hope Road and picked a bank at random — RBC Bank.

Verone didn’t want to scare anyone. He executed the robbery the most passive way he knew how.

He handed the teller a note demanding one dollar, and medical attention.

“I didn’t have any fears,” said Verone. “I told the teller that I would sit over here and wait for police.”

And sure enough the police came and arrested Mr Verone to his relief, who is happy to say he is finally receiving the necessary healthcare that he needs. Because the money he attempted to rob was less than what would merit the classification of grand larceny, Mr Verane can expect to receive a short sentence. But that hasn’t stopped Mr Verane from arguing in a letter he sent to the Gazette the morning of his robbery he would do it once again, and that he has no regrets because he did everything he possibly could in his power to get the health attention he was in so desperate need of.

All of which begs the question, why does it take a man plotting his ultimate demise and freedom in order to attain the dignity and well being that is afforded to most citizens in the free world?

Or if you want to cut straight to the chase perhaps we ought to ask why the indoctrinated power structure we insist on leaving healthcare to a capitalistic operandi who at its very essence has the pursuit of profit over that of a human being’s well being?