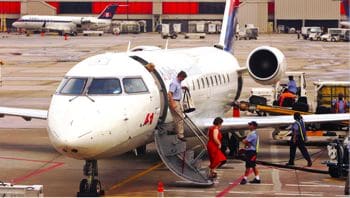 Have you ever sworn on a plane before?

Robert Sayegh was sitting on a Southeast Airlines flight 5136 yesterday afternoon in Detroit wondering to himself why the plane was taking so long to taxi onto the runway and into the sky. So like any agitated good natured passenger, he exclaimed out aloud ” What’s taking so (expletive) long to close the overhead compartments?” All within earshot of a flight attendant.

Nevertheless the plane then began to taxi down the runway when it suddenly returned to base, with police boarding the plane and you guessed it- arresting our hero Robert.

detnews: “I’m like, ‘Are they throwing me off the plane?'” said Sayegh, who said he used the F-word twice. “This is the most ridiculous thing I’ve ever been through in my life. It’s embarrassing.”

Sayegh said he was told only after he left the plane that he was removed for being “disruptive,” and airport police never filed a report.

“It wasn’t like I stood up like a crazy maniac and was screaming, ‘Move the plane!'” said Sayegh, who said he grew up in Brooklyn where “we curse as adjectives.”

One has to wonder if Robert Sayegh was jumping up and down, waving to the captain, not only would he have the police wanting to have a quick word with him but the bomb squad and whatever other government militia outfit that happened to be milling around the airport. But then again this is post 9-11 and a crackling of a potato chip on a plane can have you escorted off the plane with your seatbelt still jingling by your navel.

Sayegh said he was hung over, but not drunk. He insisted he would never disrupt a flight: “My cousin was killed in 9/11. A lot of friends died in 9/11. I would never come close to doing anything like that.”

The airline for its part is conducting a research and has apologized to Mr Sayegh for any inconvenience this has may have caused him. For his part Mr Sayegh has nothing of it and has informed the airline he intends to sue. Which make this author wonder, thank God it was all just a hangover and not in the middle some moment when Mr Sayegh was bringing down the whiskey and what ever else one is capable of bringing down.