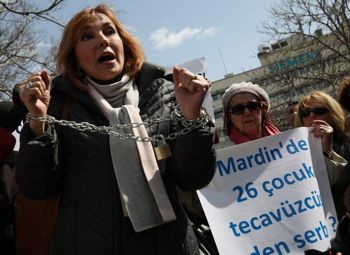 Live in Turkey, happen to be a woman and aren’t into being sexually harassed? Then Turkey’s Justice and Development party has the perfect antidote to all your woes- simply stay indoors and you will never be sexually harassed again. Sounds like a great plan right? Or doesn’t it?

hurriyetdailynews: “Do not walk around, sit in your homes,” 71-year-old Justice and Development Party, or AKP, Mayor Necmittin Dede recently told Muş representatives of the Women’s Center, or KAMER, when they told authorities that high employment in the city had resulted in men spilling out of the overcrowded teahouses in the area to verbally harass female passersby.

Verbally harassing female passerbys as you can imagine must be a real chore and if we are to show consideration to all those men who for some reason or another who feel compelled to express their feelings towards the opposite sex then having women sequestrated might just go a long way in making sure harmony reins supreme in the streets.

Of course others posit the view (hard to believe) that perhaps it is the men’s attitudes that need to be challenged and society need to be made aware of women’s rights and issues. How does the Mayor feel about that?

KAMER representatives said they had enjoyed success in cooperating with local police on women’s issues, but added that public institutions, such as the one led by the mayor, remained indifferent to their cause.

“We have appealed to the authorities time and time again, yet they do not allow us into the schools to conduct training sessions about women. So we visit households instead. We conducted surveys in 700 households until now that show the rate of domestic violence stands around 70 percent,” said Necmiye Boz of KAMER.

So maybe the mayor knows better after all? But what happens when the violence towards women instead of being orchestrated on the streets begins to get orchestrated in the house- which is what the Mayor is effectively advocating?

A total of six honor killings have been committed in the province over the past two months although some of the deaths have been passed off as suicides, according to Boz and another KAMER representative, Ayşegül Söylemez.

In previous comments, Dede said, “If women were man enough, they would have become prophets.”

Interesting dilemma. Don’t step outdoors and don’t be too much of a man when at home. Sounds like it’s a man’s world in Turkey. Or is it?

Since 1984, thousands of women have joined the group, which advocates for and extends aid to victims who face attack, arrest, torture and even death around Turkey.

The group also aims to provide analysis on the people who are convicted of beating, stabbing or raping women.

One day deep in the future men will begin to complain that they too are now being sexually harassed by women. And what will the mayor say? That men should stay indoors or somewhere along the way it might have been a good idea to address the perpetrators of such deeds. But maybe that’ll happen the day Turkish women start whistling at Turkish men silently sipping on their teas. Funny how unfair life is sometimes…