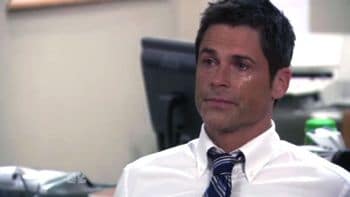 As the entire blue marble now knows, Osama bin Laden is dead. While the world rejoices, one man is sifting through the clutter, finally playing the cards he’s been sitting on for almost a decade.

Scene:  A show that may be a contributing factor to why these terrorists hate us— “The View.”

“I flew with the 9/11 hijackers on the dry run, without realizing. I was shooting ‘The West Wing’ in D.C. at the time and I always took the flight that leaves Dulles to Los Angeles that they eventually put into the Pentagon.”

Lowe found out this was in fact a dry run after receiving a letter from Maryland’s Attorney General.

I have nothing but sympathy for all those affected by our nation’s greatest tragedy, including those who were close to danger, but escaped , such as Rob Lowe.

What I do have a problem with, is C-list celebrities trying to suck some exposure out of this tragedy.

Why didn’t he tell us this when he found out? Did he feel we had been through enough, and needed a decade to regain the strength required to handle such horrific news?

I’m sure him dropping this bombshell on us now has nothing to do with his book, Stories I Only Tell My Friends, coming out later this month.

He only tells his friends those stories because they’re the only ones who care. That “juicy diary” feel to his book’s title is almost as curious as the timing of his 9/11 near-miss tale.

Best of luck with your book, Rob, and thanks for the delay. I speak for the nation in saying, we are now ready to hear your story, and fully embrace you as the national treasure you are.