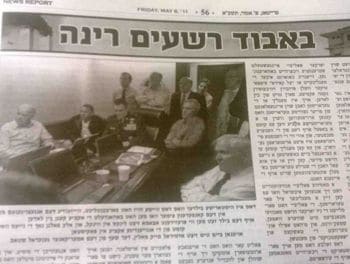 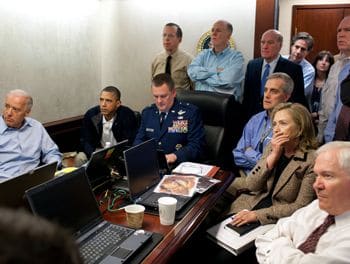 All the news that’s fit to print.

In keeping to their belief that women are second class citizens, an orthodox Hasidic journal called Der Tzitung decided when it came time to publishing images of members of President Barack Obama’s intelligence team as they sat in the situation room and watched a top secret team take out live Osama Bin Laden that it would be better to reprint that image without the presence of Secretary of State Hillary Clinton and Counterterrorism director Audrey Tomason, both women in it. Why you wonder?

jezebel: The religious paper never publishes pictures of women, as they could be considered “sexually suggestive.”

Yes, I have to confess the visage of Secretary of State Hillary Clinton and Audrey Tomason stoically looking into the distance as symbolic political heads has got me perspiring and strangely aroused. But that’s just me.

Apparently the presence of a woman, any woman, being all womanly and sexy all over the United States’ counterterrorism efforts was too much for the editors of Der Tzitung to handle.

While saving precious vulnerable men from being driven mad with desire over the image of a woman may be in line with Der Tzitung‘s editors’ ideas of piety, Jewish Week’s Rabbi Jason Miller points out that the altered image violates a central tenet of the faith,

Der Tzitung edited Hillary Clinton out of the photo, thereby changing history. To my mind, this act of censorship is actually a violation of the Jewish legal principle of g’neivat da’at (deceit).

Isn’t it compelling to know that a journal will resort to dubious photo shopping tricks in order to reinforce a preferred truth. So now you know it’s just not just fashion journals who do it, but also religious extremist journals too- who want to make sure you have the correct idea of what a woman is all about. Now that’s what I like to call journalism of the highest caliber.