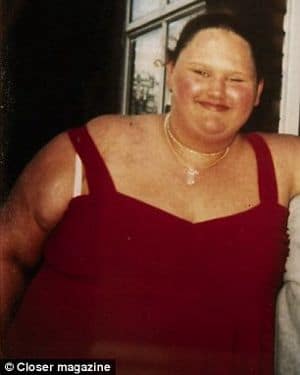 The world is very very dizzy in Malissa Jones’ mind…

In what could be said to be one of the most perverse situations in Britian of late- one British teenager, Malissa Jones after being one of Britain’s fattest teenagers and undergoing gastric bypass surgery to rid her weight problem is now on death’s row after now having become anorexic.

dailymail.co.uk: Malissa Jones, 21, lost so much weight that she now tips the scales at just 8 stone. Four years ago, before her surgery, doctors were warning her that she had to take drastic action after ballooning to 34 stone.

They warned her she had to shed 20 stone or would die within months. Now the pendulum has swung the other way for Malissa, from Selby, North Yorkshire with doctors now warning she could die in six months unless she increases her food intake.

Having been one of the youngest persons ever to undergo gastric bypass surgery, Malissa said prior to her operation she was consuming 15000 calories a day, 7 and half times the recommended 2000 calories for a girl for her age. That’s when she decided to take action, with the perverse consequences her actions have put her at the other extreme end of the weight scales…

Despite the risk of drastic surgery in such a young girl, she survived the operation and within a year lost more than half her body weight.

She started going clubbing and fell pregnant with farmer boyfriend Chris Robottom, 22. In February, after six months’ pregnancy, she became ill with liver failure and her baby had to be delivered by Caesarean.

Sadly her baby, Harry, died an hour after delivery. Doctors then revealed Malissa’s failure to eat properly had led to him being malnourished.

Malissa’s weight dropped rapidly as she lost interest in food and doctors have now diagnosed her as anorexic.

And what does Malissa say now?

‘I’m too thin. My body shocks me. But swallowing is painful. Eating a tiny amount gives me stomach cramps or makes me sick.

‘My consultant says, if I continue like this, I only have six months to live.

‘I will most likely die of a heart attack, so I must persevere with eating. I am trying, but it is so hard.’

What can one really say about Malissa- just an unfortunate girl, trapped in her body or perhaps on some deeper level a conflicted soul trapped no matter what body you put her in.