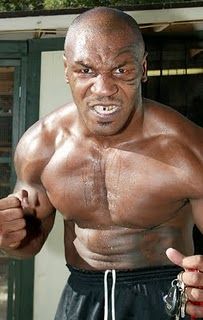 Mike Tyson–with his Al Capone-like rap sheet, prolific punching power, and ear chomping affinity– is no stranger to heinous acts of violence. While he’s unlikely to be implicated in this story, it’s safe to say if he were never born, Russia would have one more vodka consumer alive today.

HeraldSun: An argument over the respective merits of US boxing legend Mike Tyson and Ukraine’s Klitschko brothers ended with a Russian college teacher stabbing his friend to death, investigators said today.

Nikolai Makeyev, a teacher in the Siberian city of Tyumen, was having drinks with two other men in his apartment when the argument broke out, the regional investigating committee said in a statement.

“Makeyev said that Tyson would come out as winner, but his guest accused him of a lack of patriotism. The host did not like that and he fatally stabbed the victim several times in the back,” it said.

The other guest, Makeyev’s friend, managed to flee to his own apartment though he also had stab wounds, and his wife called the police.

For those of you who remain unsure about the outcome of a USSR-USA war back in the 1980’s, consider it a major bullet dodged. Sure, we probably would have systematically broken their will with a carefully executed Scorched Earth attack, but it wouldn’t have come without great loss.

If a Russian man is willing to go Scream 4 on his friend after being accused of a “lack of patriotism”, one can only imagine what might have been.

He’ll spend the rest of his life in a Soviet Gulag–enduring great famine, impromptu guard beatings and backbreaking labor at gunpoint–but he’ll sleep easy; there’s no way he could have let his friend get away with that.

As for the deceased: He’ll be honored as a Martyr; one brave man who put a nation on his back, while having a knife lodged in his own.

But maybe patriotism didn’t fuel this thrashing, maybe it was the famed Russian sauce.

Alcohol abuse kills around 500,000 Russians annually and greatly impacts on male life expectancy, now 63, which is lower than in developing countries such as Bangladesh and Honduras, according to official figures.

Keep your eyes peeled for more stories like this as Russia drinks itself into third-world status.

As for Tyson: There must be some misdemeanor we can tack onto his laundry list of malfeasance, any lawyers out there?