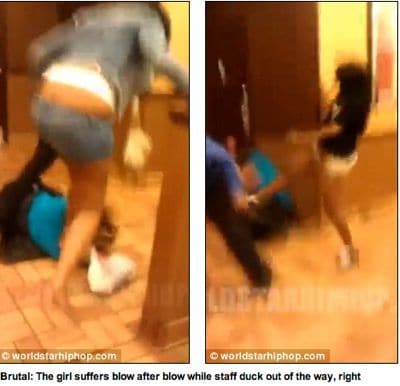 It looks like McDonalds has another public relations nightmare on its hands, following Wednesday’s debacle where a brawl erupted in Ohio in the parking lots as candidates waited to fill out employment forms. Except this debacle took place in Rosedale, Baltimore were a transgender was mercilessly beaten, to the point of going into a seizure whilst one McDonald’s employee- Vernon Hackett filmed it and was later posted on the web- where it went viral.

To say management was appalled with Vernon Hackett’s actions and his fellow co workers is an understatement. That said, let’s order some fries to go as we try to make sense of the dizzy mess spilt on the McDonald’s Baltimore tarmac…

dailymailco.uk: The Baltimore County McDonald’s at the centre of a scandal, after footage of the violent beating of a customer on its premises went viral, has sacked the employee who filmed the attack.

Mr McPherson said: ‘My first and foremost concern is with the victim. I’m as shocked and disturbed by this assault as anyone would be. The behaviour displayed in the video is unfathomable and reprehensible.’

Are we really to believe that Mr McPherson’s concern is for the victim or the dire disdain of his establishment where employees allowed a beating to take place at the hands of a public left with an abrasive after taste after chomping on last Monday night’s burger and action packed video?

It’s one thing to complain about an under or overcooked burger but another thing to complain about fists and hair flailing around while fellow alumni rather than stopping or mitigating a dangerous fiasco choose to record it. Never mind the fact that they are heard laughing in the background- which makes the situation even more horrific.

The shocking footage, where the 22-year-old victim is brutally beaten to the point of having a seizure, happened on April 18.

The attack was believed to have been sparked after an argument over using a bathroom in the restaurant.

‘It does appear that the victim was a transgender woman, and she was brutalised while people stood by and watched,’ Lisa Polyak, vice president of the board of directors for Equality Maryland, told the Baltimore Sun.

The LGBT group is now calling on police to investigate the attack as a hate crime.

Hate crime? Surely that too leaves a nasty after taste after one washes down the fries with a large order of diet pop. What food chain wants that on their menu?

Yet this too begs the question, just by virtue of recording the violence can one necessarily say that the employee or the employer sanctions that conduct? Was the act of filming just a desire to record what appeared to be the unbelievable? After all, when a news bureau captures footage of innocent people being blown apart are we to argue on some level they are sanctioning violence by the very act of filming it rather than offering sustenance?

During the brutal attack, which lasted for several minutes, the white victim was repeatedly kicked in the head and stamped on by two black girls in the fast food store.

Staff stood by and even laughed as the attackers grabbed the victim’s hair and dragged her across the floor.

Then again, standing by and laughing hardly ingratiates one with the greater public consciousness.

And as you watch the video (which we warn you is quite graphic and very disturbing) one commentator on one website had this to say:

The female ‘animals’ need to be apprehended, and charged with attempted murder… the victim needs to sue McDonald’s for everything they are worth.’

And yet then this point of view:

Others, however, argue that it would have been dangerous for the employees to have intervened.

Which begs the question- what is more dangerous? Leaving the victim to fend for their life against a merciless bunch or just sitting there doing nothing and idly laughing away? Who’s the real victim and the real perpetrator?