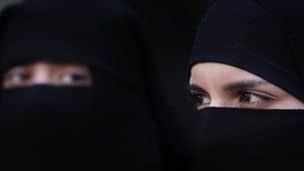 Should the ban be lifted or stay?

As France officially began the launch of a new law which prohibits the wearing of head veils/garbs in public- aimed as many see it as those practicing the Muslim faith, consternation has begun as to the supposed fairness of such a law.

That said, with the new law in place, today 2 protesters in Paris chose to defy the ban and were subsequently arrested. To date it is unclear whether they were fined the $215 penalty.

abc: There are some 5 million Muslims living in France, but only about 2,000 women are estimated to wear the now outlawed veils. Many of those women have vowed to defy the ban.

“On Monday morning, I will go shopping, to the post office and city hall if necessary,” said Kenza Drider, a mother of four who has become the veiled face of women opposing the new law. “I will under no circumstances stop wearing my veil.”

At the heart of the matter France’s President Nicolas Sarkozy argues such a physical countenance poses a public danger and a form of ‘enslavement’ while Muslim women who feel the new law is targeted specifically for them as a threat to their ability to practice their faith and see it as an attack on their rights of freedom of expression. At worse many Muslim women argue the new law serves to stigmatize them and isolate them as pariah figures.

Many opponents of the ban say it violates the country’s religious freedom statutes.

“I think we need to respect the opinions of the people who want to cover their faces because of religious beliefs,” an unidentified Muslim woman who does not wear a full veil told ABC News. “That is part of being a secular society.”

Which begs the question; how ironic is it that the new law seeks to ban people from covering their faces should they choose to, which in itself one could argue is a type of enslavement- even if it is a voluntary one?

Perhaps at the heart of the matter is a deep mistrust between 2 groups – a secular government seeking to maintain its aesthetics, even by the threat of the law and another group, a fundamentalist sect of Muslim that believes in its right to express itself as it sees fit- even if it offends or confuses the usually fashion forward French. One has to wonder how this would all be received if one day in the future Paris haute couture begins to throw tribute to such physical manifestations- assuming the catwalk models don’t get fined as they strut the planks…

For now we’re willing to bet that many French muslim women will stay indoors, in order to avoid being fined, a kind of perverse and perhaps natural reaction to a law that has perversely affected what it sees as perverse behavior…