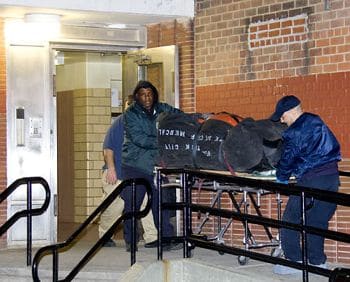 The mutilated, rotting body of a nearly half-ton man was found shoved in a bloody duffel bag in Soundview this weekend while police officers were responding to a separate incident in the Bronx housing projects.

The unidentified, super-sized discovery had been in the apartment for many days according to investigators. It wasn’t until police detected a foul odor from the neighboring apartment that they made a truly gruesome discovery.

NY Daily News: Blood covered the floor,  cleaning products were strewn throughout the room, and a bloody hatchet was lying near by…

The icing on the cake? A 400 pound dead body in the kitchen closet…

The bloody duffel bag had been leaking from the closet where it was being kept, producing nearly eight pints of blood according the police.

The 400-pound  victim is thought to be a building drug dealer with a reputation for having a  ‘sweetheart’ disposition and helping children stay away from his own behaviors through ‘life lessons and candy bars.

He’d give me lectures on life lessons, said Anthony Terc, 17. He was a cool guy.

Unfortunately, the unidentified was evidentally not as ‘cool’ with this comrades as he was with the neighborhood kids. He was trying to exercise and eat healthier, claimed one friend, but alas, his fate was already sealed. Literally.

Sources said investigators believe the decomposing body had been in the apartment for days before the grisly find.

The putrid odor was so strong that it lingered on the uniforms of the responding officers, sources said.

“It was a bad smell and it’s still there,” said Laureano. “It smells like a dead rat. It’s bad.”

Which begs the question- who ratted out the dead man, or was he just acting like a rat when he got his?