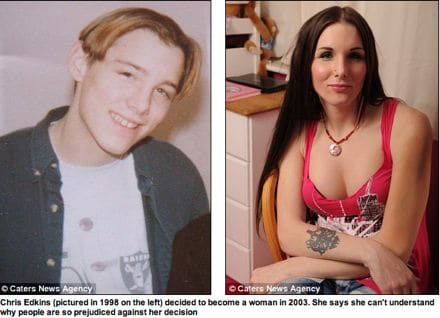 dailymail.co.uk: A bodybuilding father has transformed himself into a glamorous woman after struggling with his gender for years.

Transgender Chrisie Edkins, 31, had spent hours in the gym – bulking up to 16stone – in an attempt to convince himself he was a typical alpha male.

But in private, Chris, who is 6ft, had been dressing as a woman for years – and in 2003, bravely decided to go public with his new identity and become Chrisie.

A full-time carer to her daughter Chloe, nine, Chrisie has faced a backlash from outraged neighbours and even been physically assaulted after announcing she was going to live as a woman.

But Ms Edkins, from Southampton, is adamant that being a woman doesn’t stop her from being a good father.

Infact her 9 year old daughter, whom in Chrisie’s eyes is more mature than most adults has this to say when it comes to the usual bullying that comes with having a transgender mother father waiting to pick you up at the school gates:

‘She has been teased a bit at school – but she can take it all in her stride. She just turns round to the bullies and tells them, ‘My dad wants to be a girl”, and they don’t have a clue what to say back to her.’

But in case you think Chrisie has had it easy, here’s something sobering for you:

‘In 2003, I changed my Facebook profile and let the world know who I really was.

‘A lot of people were supportive, but some blanked me or removed me as a friend.

‘The same night, I saw a black BMW pull up outside my house and three men in balaclavas jumped out.

‘They burst into the house when Chloe was upstairs asleep and pulled me to the ground.

‘They kicked my body and head and left me in a bloody heap on the floor.

‘I knew it was because I was living as a woman – it was too much of a coincidence not to be.

‘I was so worried about Chloe seeing me battered and bruised. She was devastated.’

Chrisie added: ‘I just can’t understand why people are so ignorant and prejudiced.

Wouldn’t the world be a better place if people stopped worrying about what other people should be and owned up to be who they actually ought to be, even if that sometimes means going from a 220 pound body builder to a svelte glamour model. Kudos to you Christie.