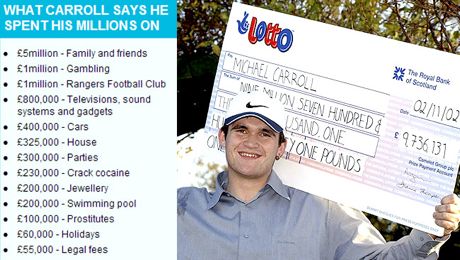 How to go from winning $15 million 8 years ago to earning $100 a day as a day laborer and alcoholic on the side.

Things haven’t quite worked out the way Michael Carroll ideally would have liked it, but then again, perhaps after a cursory summary of the details below- it just may be what Michael Carroll wanted after all…

Nine years after he famously turned up to collect his winnings wearing an electronic tag, 27-year-old Michael Carroll has turned up in a court again for breaching a community order for drink driving, MailOnline reported.

Which probably most of you at home wondering how exactly did Michael forfeit all that money?

Carroll, who has a string of criminal convictions, frittered away almost his entire fortune on wild parties, cocaine, prostitutes, luxury cars, chunky gold jewellery and cash hand-outs to hangers-on.

What type of wild parties you wonder? Grab your straw and bottle opener and follow this way…

He made the lives of neighbours a misery by buying a 1.2 hectare field to stage demolition derbies in old banger cars behind his former home in Swaffham, Norfolk.

Oh well, Michael, had to have the childhood he never quite got to have in reality. And what a childhood…

The field was left littered with the remains of dozens of his crashed and burned out cars. At one stage his antics became so bad that council officials set up a hotline for neighbours to report disturbances he was involved in.

And then one day he just lost the lot….

“He is an alcoholic, but he has been very honest about his alcohol issues with the probation service.

“He continues to drink heavily and it has now become far more than social drinking.

“He is now working as a painter and decorator and not troubling the state by claiming benefits. He is back at square one and just wants to be left alone.”

Left alone, but really wasn’ t that all Michael Carroll wanted when he first won all that money?

The former dustman arrived at court carrying a holdall bag because he expected to be jailed – he was spared having to serve the suspended 16-week sentence.

He said after the hearing that he was “relieved” not to be going back to prison.

Relieved not to be going back to prison but living a kind of mental prison one anyway, one that he lavishly tried to break free from only to have to return to the roots to perhaps come to some understanding of who he really is. Let’s hope Mr Carroll doesn’t drink on that dime…