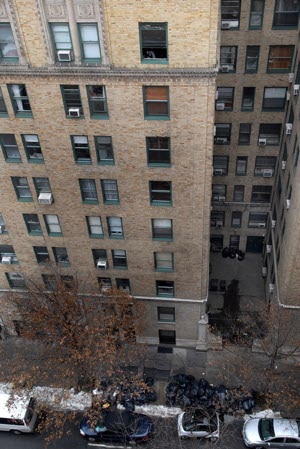 Sometimes it’s just not your time to go.

This weekend past, Vangelis ‘Angelo’ Kapatos decided to end his life by jumping out of his ninth floor apartment in Hell’s kitchen, except instead of dying as one would expect he ended up surviving. Surviving because the blizzard which had come post Christmas had led to a stall in the collection of garbage that by now had come to resemble a plush of cushion. Albeit a smelly one.

nypost.com:  Kapatos, 26, of 325 W. 45th St., jumped just after noon, landing on his back on garbage bags heaped high outside the 10-story building, authorities said.

He left no note and no one was home when he fell.

Kapatos was taken to Bellevue Hospital in critical condition, and was in surgery hours later.

His aunt, who spells her last name differently, said he’d been released from Bellevue’s psych ward last Wednesday after spending about a month there following a nervous breakdown.

Nervous breakdown one imagines because of the stress of life and the additional stress his landlord has been putting on him. A type of stress that so easily even unsettles the most resilient New Yorkers.

She also said a dispute with his landlord — who she said wants to evict him from the $572-a-month, rent-stabilized unit that technically belongs to his parents — had been weighing on her nephew.

His next eviction hearing in Housing Court had been set for tomorrow.

And once again Mr Kapatos will be forced to reckon with his lot as is the next man, but hopefully the knowledge that he didn’t die from a calculated suicide attempt should put enough courage in him, as senseless and mercurial the world and landlords can often be one is so often willed by forces greater than them to continue the journey.