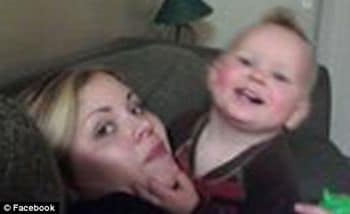 The extracurricular activities of one couple’s 2 year old boy…

Mom and dad are you making sure you are giving Jr all the nourishment he needs in order to make it through the day and his burgeioning toddler hood? Not sure, well let us introduce you to one couple who certainly are. So kick back, reach for the good shit and take a deep drag with us and while you’re at it, make sure Jr is there taking a few drags of the good shit with you. Ready…?

dailymail.co.uk : A couple are being held in custody for allegedly allowing their 23-month-old child to smoke a marijuana pipe. Police in Hesperia, Southern California, said they were handed a video showing the young son of 20-year-old Melanie Soliz and 24-year-old Blake Hightower smoking pot.

Hmm, is that so? But that must have been a one time deal right? Right…?

Well at least it didn’t have any crack cocaine, crank or any other wonderful residue in it. Unless that pipe is sitting in the other room…?

After viewing the video and confirming the accusations, Guerra went to the couple’s home and spoke to Soliz, who is seven months pregnant.

Guerra found the pipe used by the child in the video along with several others, she said. Soliz was arrested for  cruelty to a child and taken to West Valley Detention Center.

Arrested for cruelty? But that was the best part of the day. How can you deprive a 2 year of the good shit?

In statements, both parents said they had medical marijuana cards, but neither could explain why they would provide their child with pot and have the incident filmed.

Why couldn’t the parents come up with a reason? Well that’s because it was all their 2 year old boy’s idea. What parent would decline their 2 year old’s plea for the good shit? Would you?