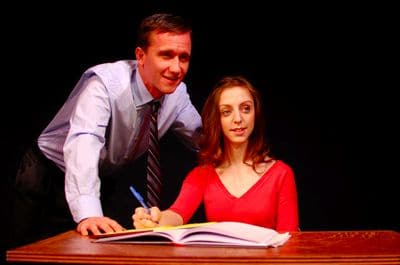 Certain messages are timeless—they hold special meaning regardless of the when they’re heard. Sidney Lumet’s media frenzy Network was one such work. Avenue of the Americas may prove to be another.

Written by veteran playwright Martin Blank and directed by Katherine M. Carter, the two bring an energetic, frenetically paced comedy to the Tank, which goes a  little something like this:  a commercial-quoting insane woman escapes  a New Jersey hospital, only to wander straight to New York, where she quickly becomes the toast of the advertising world. It’s an episode of Mad Men, by way of Lewis Carroll.

Katie’s commercial prowess is quickly set in a flurry of interactions straight out of Big or Being There: Someone with zero qualifications blunders their way straight to the top. It’s inspired. Peppered between plot scenes are samplings of Katie’s ‘genius’; namely ad spots that are so stunningly wrong that the audience (both in the theater and the “viewers at home”) is left completely gobsmacked—and curious to see what’s next.

Winding further into the lunacy of the advertising world, we learn more about Katie and how she came to reside in an asylum in the first place.  Her story is a tragic one, and ultimately quite complete. The play’s bookend symmetry delivers chills and a stunning one-two punch.

Playing the vacant-eyed Katie is Laura Yost, who creates for us a warm, unsettling cipher of a woman. No-one can make heads or tails of her, so she captivates her co-workers and the audience.  It’s her delivery and timing that breathe life into parroted ad copy, and make it pass as dialogue.  She’s the reason Katie can pass for ‘normal’. 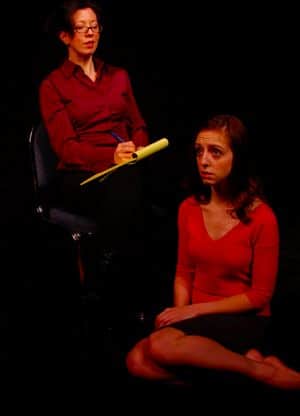