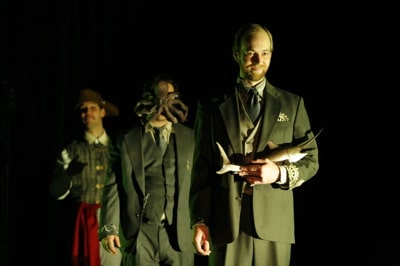 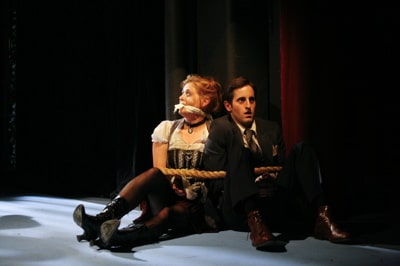 Set in 1896, Murders concerns a quartet of well-to-do environmentalists, The Four Elementals; who promptly begin dropping like flies. A founding member is found stabbed through the heart with a swordfish. The dwindling remnants chase what scant clues they can to try and find their culprit.

Is it whale oil baron Henry B. Lubbins III? Or the work of the infamous Blowhole Gang and their matron, Pirate Penny? Or could it be the work of the possibly-made-up Fish Monger? Just who is that dashing hero, The Big Stick, and why is he never seen in the company of Police Commissioner Teddy Roosevelt? And what, in the name of god, is a Land Whale? 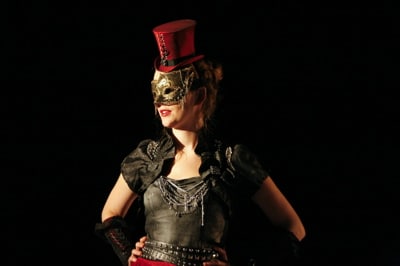 Bringing these mad characters to life is a phenomenal ensemble cast, who work together in amazing unison. A few players wear many hats, and do so splendidly.
Nathaniel Kent is magnetic as the bombastic Henry B. Lubbins III and stereotypically Irish police sergeant Fitz.

Likewise, Rich Hollman sells every moment of his time as larger-than-life commissioner Theodore Roosevelt. He takes his work seriously, and that work is ridiculous. Robert Michael McClure plays Hiram Blud with dignity and panache, even from beyond the grave. As hot-blooded poetess Maryanne Blud, Jennifer Joan Thompson brings sincerity and warmth to a woman trying to make sense of insane crimes.

Stealing the show, however, are Carl Howell and Amy Landon as would-be sleuths Eugene Neddly and Angus Troup. Eugene is an absolute moron, and frequently misses the point by entire leagues. As the ‘straight man’, Amy Landon’s restraint and patience with Eugene’s earnest tomfoolery provide space for some of the biggest laughs of the night. 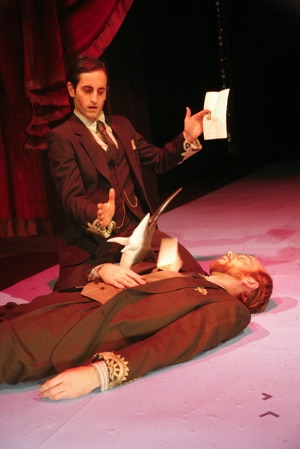