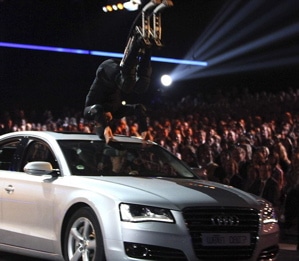 The audience is silently dumbfounded.

In what could be more described more shocking than the stunt student Samuel Koch attempted to overcome (the jumping over of 5 successive oncoming cars with kangaroo like spring stilts) German audiences were left dumbfounded and in a kind of suspended soul searching as they watched incredulously as a young man lay possibly paralyzed on the floor as the fourth car he attempted to jump over met with disastrous results live in front of an audience used to by now to grander feats of awe and titillation.

Daily Mail Co Uk: This was the shocking moment when a stunt went horribly wrong in front of millions of TV viewers.

Student Samuel Koch was trying to jump over a series of moving cars while wearing ‘kangaroo’ spring stilts when he got caught by the fourth vehicle – driven by his father – and fell.

As he lay motionless on the floor, distraught Wetten, dass? host Thomas Gottschalk called for a doctor and the cameras panned away from the stage.

Panned away from the stage because these aren’t the sort of things audiences have come to see or put another way these aren’t the things studio executives want audiences to see, when in essence they have come to the show looking for respite and fantasy, not necessarily the objectification of the gruesomeness of reality and its inconvenient lapses. Never mind the irony of being hurt by his own father who was the driver of the offending car.

The 23-year-old was conscious and treated for a number of minutes before being strapped to a spinal board and taken to hospital.

Last night he was operated on at the University Hospital in Dusseldorf, but there was no news on his condition.

Wetten, dass? (Bet it?) features stunts by members of the public and is one of the most watched shows in Europe.

Koch had claimed he could leap five cars within four minutes in his spring-propelled stilts.

Which begs the question, now that the show has been indefinitely cancelled by the host, who was deeply mortified, concerned and has been on the air since 1981 what does this mean for television content going forward? Will studio executives shrug this of as a one off, water the type of stunts to knee high movements or possibly try to find alternative forms of amusing and pacifying an audience hungry for the bizarre and potentially lethal as a subconscious desire to overcome their own metaphorical life dilemmas?

When he had introduced the stunt, host Gottschalk told the audience that he had been very worried watching rehearsals of Koch jumping over cars being driven towards him.

He had told magazine Der Spiegel: ‘I have never been so scared that something would happen to this young man. I can only say, I hope all goes well.’

The magazine speculated that the stunts were becoming increasingly dangerous at least in part due to competition from the rival Das Supertalent show which goes out on a rival station at the same time.

Which has us wondering even more, who should be more worried now- the host, the the victim attempting to please the audience, his family, the competing show or the audience who will now be forced to metaphorically complete their own stunts?