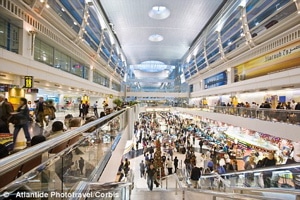 Isn’t it time you pay attention what lies waiting for you in garbage bins?

Dubai International Airport : A hunt out is underway for what authorities believe an Ethiopian women pursuant to security cameras catching her giving birth to a baby, strangling it, dumping it in a rubbish bin and then making her get away flight.

Be warned the following is rather grotesque and for those of you with a weak constitution perhaps a brown paper bag to throw up in might suffice.

dailymail.co.uk: The woman allegedly severed the baby boy’s umbilical cord with her bare hands and strangled him with a cloth before dumping him.

The infant was discovered when a woman passenger informed one of the airport’s cleaners about a pool of blood in the bathroom.

Traces of blood led to the bin where the baby was found, soaked in blood, tied up with his umbilical cord in a tightly wrapped plastic bag.

The boy was still gasping for breath but a rescue team and volunteers could not revive him.

Which begs the immediate question why would a mother do this to her child and were there no other options that that she could’ve turn to given what one imagines must’ve been untenable options in her mind?

It is unclear whether the woman was a UAE resident, tourist or passenger in transit.

‘Most likely the woman wanted to get rid of the baby as it was a child outside wedlock,’ said the source. ‘It seems that the woman had intended to leave the UAE before the delivery but was faced with a different reality in the airport.’

Which has us wondering speaking of reality, wasn’t the mother concerned that people would be wondering what had happened to her? One minute she’s pregnant, and the next after ‘washing’ her hands she’s suddenly significantly thinner? Weren’t people aware that something strange and vulgar was up as this woman carried out her plan?

Having a sexual relationship or a child outside wedlock are criminal offences in the UAE that carry sentences of up to three years in prison.

Many unmarried women who become pregnant choose either to leave the country or abandon the youngster.

Even if the mother abandoned, or in this case physically killed the child lest its presence kill her in her particular society metaphorically speaking surely it must’ve been apparent after the 4th month that she was pregnant and thus obviously had transgressed the rules to those who knew her. Choosing to treat the child in such a way as opposed to at the very least seeking to place it in an adoption facility must suggest the greatest degree of callousness and disregard for life, no matter how frightened or deterred by the child’s possible existence.