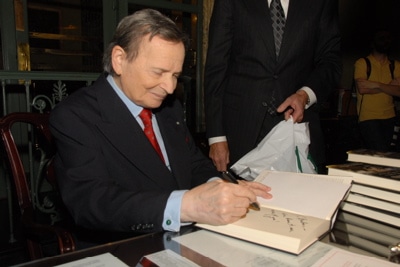 Music infused with the pains of discovery, recovery—tones highlighted by the plethora, turned purple and green—Byron wrote a novel that takes notice of the long-forgotten classical art: The Piano. How do fingers come to learn the trade, that million-dollar industry, for Steinway and Sons, in spite of arthritis? This is the question Byron Janis has teased playing furiously in concert halls around the world. Battling disease-plagued fingers, up keeping a spirit well aware of its consequence, and hiding his psoriatic arthritic pain for decades at a time, Janis created legendary sounds. His spirit managed to access the finer acoustics and threads, tumble through doorways everywhere, enter everyone’s’ mind spheres and challenge the disease that threatened his solid expression.

Head-on ambition, and entrepreneurial artistic expertise brought on “Chopin and Beyond-My Life in Music and the Paranormal” and Byron’s CD. Personal, intimate and deeply embedded with perception through piano—fractal lenses his fingers managed to dribble, like a basketball, shot into everyone’s eye-hoops—Byron’s word taps realities, triggers the paranormal and explores the undertaking of dreams. Chopin, Delacroix…museum houses, chambers…the Louvre or George Sand Museum of Paris; Love infused history, De Gaulle and the Nazis; CSR, Algeria and Vietnam, Byron glosses over decades of history, providing new insight into life, history. Protecting his whole behind with piano, a shield Steinway Hall well represents as a so possible a recourse from misery and pain—Byron cries the ivory into tentacle keys. Chopin, his signature composer, inspired his impressionistic rhythm. Deeply introspective and stealthy, Byron found himself stealthily using the pedal, intensely creating waltzes, sonatas, nocturnes, mazurkas and impromptus. Now he has written a memoir that captivates his family and friends.

Keeping readers on edge, is never an issue, because a Chopin inspired poet will always have something to say, in a most interesting way. Inflammation, sliding joints and pierced nerves inhibited him not; they were, rather the spearheads he’d learn to live with. Breaking through convention, considered a “miracle” by doctors and persistent at developing his prodigal talents, Byron earned his face on the walls, next to Beethoven and Mozart. He further married American film actor, Gary Cooper’s daughter, Maria Cooper Janis. Kin to the most emotionally reserved, quiet and noble Western film star, Maria Cooper has contributed heavily to Janis’ success, progress.

He became Ambassador of the Arts for the Arthritis Foundation, performing at fund-raisers and speaking since 1985, and is Chairman of the Global Forum Arts and Culture Committee. He composes his own symphonies that a lucky dozen had the opportunity to relish at Steinway Hall, 109 W. 57th one recent Monday. The 25% donation to A.F., as well as its logo, placed conveniently on the cover of each of Byron’s hardcover, demonstrate his devotion; unable to succeed alone, he manages to motivate and gravitate the less capable, through his example.

Mausoleum sheltering Steinway & Sons’ legacy since 1853, medals and medallions encased with historically relevant photographs, head-sculptures of Steinway dynastic figures and painting replicas-of the late 18th Mozart century filled the gallery-space. Baby-grand pianos strewn in the “Secrets of Steinway” back chamber, seemed to create an orchestra collective. Funneled out, was the long-hallway, studded with upright pianos, lined up like buttons. On both sides, stood those $23,000 stoic creatures, like bushes lining a pathway, a tunnel-line swerved in it beginning and evolved, grand-piano forgiven. Grand pianos took over, 53-thousand and up, they filled Steinway Hall’s ‘secret chamber,’ and there was no telling what would go on there, tonight.

Byron Janis proudly spoke, eighty-two years old, he hypnotized audiences with quotes, words and symbols; then, afterward he sat down at the Steinway Grand deluxe, to mesmerize. Tune 1- he’d been playing all of his life, since Carnegie Hall, age 20; pop-style tune 2 was a musical theme he invented for The Hunchback of Notre Dame. Inflammation, joint-setbacks, fingers debilitated.

The earliest known piano model (1709) was called in Italian, the “harpsichord with soft and loud” equivalent. Clavichord, pianoforte hammer-and-lever actions geared toward intensifying the subtle, the known—Byron’s memoir captures his upbringing over the piano. Instruments designed specifically for him, Byron never doubted the bass strings’ ability to stretch strategically over the shorter treble clefs.

Chopin musicologist Arthur Hedley notes that Chopin “had the rare gift of a very personal melody, expressive of heart-felt emotion, and his music is penetrated by a poetic feeling […] that […] places him among the immortals of music by reason of his insight into the secret places of the heart […]”. He’d slipped composed manuscripts Byron unearthed in France, in1967, and at Yale University, from which Byron learned to mourn losses, speak poetically and aromatically delight everyone with the rush of his fingers. Wolfgang Amadeus Mozart, Ludwig van Beethoven, Frederic Chopin, and the Hungarian Franz Liszt are among the others with whom Byron’s is grouped. He is an artist that will never be forgotten, thanks to his music recordings, but more so to his articulation through words. Books never die, their word live on from generation to the next, providing historical bases to lands unforeseen, less gotten.

Debate aside, there’s no doubt that Mr. Janis has smashed the conventional wisdom that you need healthy hands to be a virtuoso pianist. He even returned to the recording studio in the 1990s to create several acclaimed CDs. Kudo’s to you sir!