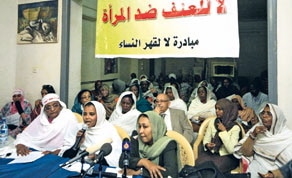 50 female protesters were arrested in Sudan on Monday for standing up against the public humiliation of women in response to a YouTube video showing a woman crying for her mother as police officers  (one of them laughing and forcing her to kneel down on the ground ) subjected her to a public whipping.

English language Qatari paper, the Gulf Times, reported: All the women were arrested and taken to a nearby police station. Their lawyers were prevented from entering, but senior opposition politicians were allowed to go inside.

If that sounds like standard practice, consider that, as one of the women’s lawyers, Mona el-Tijani asserted, ‘The authorities here [in Sudan] take the law into their own hands. No one knows what happens inside these police stations.’ …’This video was just one example of what happens all the time.’ Especially, we can surely imagine,  to women protesting whipping.

The arrest was justified by the Sudanese justice ministry because the demonstration had not been given permission. (It would, after all, have meant allowing them to leave the kitchen.)

As they were being arrested, the protesters shouted: Humiliating your women is humiliating all your people. And it’s hard to argue against that, considering the country as a whole is now being whipped, also quite publicly, by the international press.

Though it was at best unclear what crime the woman in the video had been already found guilty of committing (probably the crime of being female), some reports have alleged that she was beaten for wearing trousers; but whether or not this is even the case, at least from the video, is difficult to see.

Either way, the insinuation is that wearing pants in public (and perhaps even in private) is enough for a woman to be publicly whipped in Sudan  and as the officers say in the video, with 53 lashes specifically. According to the officers’ other transcribed banter, the woman in question could have opted to spend two years in prison (where she may well have been whipped every day) alternatively.

The Gulf Times further noted, Sudans justice ministry said it would investigate whether the punishment was administered properly.

I’m betting it was, as it’s doubtful the cops there would miss out on such a stimulating opportunity.