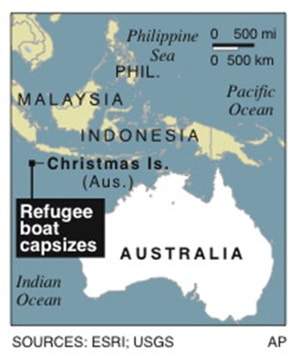 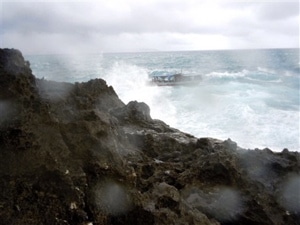 Looking for a better life finding despair instead.

Rescuers are currently battling rough seas in hopes of recovering Indonesian asylum seekers swept to their deaths as their wooden boat smashed against the notorious cliffs off (ironically named) Christmas Island to the north west of Australia. To date 44 people have been saved, but officials fear more fatalities.

newser: The deaths underscored the dangers faced by hundreds of refugees who have tried to sail from Indonesia to Australia in recent years—often in cramped, barely seaworthy boats—to start new lives after escaping from poor, war-ravaged countries.

What unfortunately isn’t only spoken is Australia’s often harsh treatment of such asylum seekers, in that current policy discourages many people seeking asylum and in the past, rather than admit floating vessels off the shores of Australia- authorities have forced the return of those persons in denominated territories solely existing to immediately extradite said asylum seekers. A situation that could have of course influenced those thrown off their boats to take treacherous routes in an effort to thwart detection…

And if you think the locals have any sympathy think again…

heraldsun.com.au: But despite harrowing accounts from Christmas Island locals, who described nightmarish scenes of bodies among the debris and flailing attempts to get to shore as “horrible”, readers said asylum seekers should not be allowed into Australia.

They criticised the asylum seekers for “queue-jumping”, endangering rescuers and taking up the navy time.

In a nation long stigmatized by its own dealings with indigenous persons, perhaps this shouldn’t surprise us, but then again with Australia struggling to deal with the ability or rather desirability of maintaining such refugees, the current disaster has once again put front and center the issue of how Australia should treat asylum seekers, especially those that take extraordinary risks to arrive on shore, where by law they are entitled due process.

“Maybe this tragedy will show that jumping the queue just because this policy has allowed them to doesn’t always turn out the way ‘refugees’ may think it will,” wrote Disillusioned on the Herald Sun website.

Peter Jay, of South Australia, said “it is their own fault”.

“They rolled the dice – they lost – but please do not try to push the guilt onto me!”

More than 10,000 people responded to a nationwide poll asking “Should Australia open the door to asylum seekers to prevent further tragedies?”

More than 85 per cent said they should not.

And what about the other 15 percent?

“Please, please, approach the embassy in your homeland and seek proper refugee status or an immigration visa. Then when you are eligible you will be provided with safe comfortable transport direct to mainland Australia. And you will be welcomed under those circumstances.”

And others were disgusted by the online response.

“Wow – possibly dozens of people dead, and all you people can do is use this story as a platform for your rants?” posted Ashamed of Not Here.

Which makes us wonder- will you be seeking asylum in Australia anytime soon?