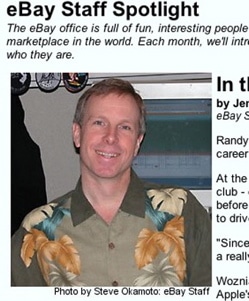 Do as you’re told, not what you think.

How do you figure out the depth of loyalty a company has for you? Well one sure quick way is to leak sensitive information pertaining to the salaries and imminent pay rises about to hit the coffers of fellow employees, that is despite being told in very serious terms by the company, which in this instance happens to be Google who is set to pay them, not to do so. In Randy’s case a master code engineer and until recently high up the yummy tech food chain- the loyalty it seemed very short lived.

The saga of Randy Wigginton is long and lively. He was employee number six at Apple. A distinguished engineer at PayPal and eBay. And now word out of Google is that he’s been fired there for leaking a raise.
A well-placed source close to Google says Wigginton, who created MacWrite and bought chocolate-covered espresso beans for the rest of the original Macintosh team, was the unidentified employee fired earlier this month for sending the press information about a 10 percent raise and holiday cash bonus. Google told its staffers a leaker had been terminated within hours of Business Insider posting news of the raise on November 10. Wigginton is widely believed within the company to be the fired leaker, said the source close to Google

Which is tech babble for although you’re smart and helped us make lots of money, you’re never too smart to disobey rules and go behind our backs, no matter how wild you like to get on the weekends and the fact that if it wasn’t for all the money and stock options you’d still be sitting in a mountain cabin inventing fiber twigs that miraculously turn into self supplying forests.

Of course there was also the potential safety concern of all those techies walking around the hood with a few extra hundred thousand dollars in their wallets and you would never want that dropping on the floor in front of potential gangs hustling in front of the local bodega. If that is you believe the dribble Gawker and Google offer you…

Wigginton might not have appreciated the safety concerns of some Googlers. “The leaker… thoughtlessly put 20,000 co-workers in immediate danger of being mugged while carrying holiday bonus cash on their way home in the dark that very evening,” one Googler told CNET. “The leaker directly disobeyed repeated and very explicit instructions from the top, not to leak this bonus news prematurely before evening when all workers were home safe.”

If there is one thing we know about weird crazy but very talented lumber jacks with a resume of who’s who in gadget and tech toys- eventually the fun and weirdness that is you stops to be fun (sorry Randy- you were just too rare a species to love unconditionally) and the first chance the brass get to send you back to your derelict ways is the first day your linkedin account says ex instead of current employee. Never mind Randy, you can now go get that job selling self destructive tin mines deep in the forest.