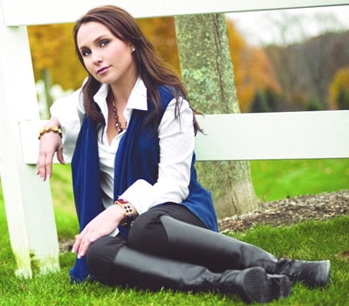 Cry a little river for me.

Georgina Bloomberg, NY mayor and ultra billionaire daughter has recently been making it in the press lately, one for injuring herself while show jumping her pony and secondly this past weekend when she went to the NY Trash Post to complain about her hot stud who she was incredibly in love with but unfortunately dumped her. A spurned heart or a spoiled girl who just couldn’t get her way? Never mind the newly tattered reputation of her too recent lothario- Olympic speed-skating gold-medalist- Joey ‘I am always a hunk’ Cheek.

Four days after Mayor Bloomberg’s daughter Georgina took a terrifying spill from a horse that left her with a concussion and a fractured vertebra, the billionairess’s boyfriend dumped her.

Olympic speed-skating gold-medalist Joey Cheek, who graced the cover of a Wheaties box, fell for Hizzoner’s youngest daughter at a Fashion’s Night Out event in September.

They hit off immediately, and Georgina, 27, who describes herself as an independent and “not very emotional person,” fell hard for the hunky 31-year-old Southerner.

Kids, I don’t know about you but I’m looking for my box of satin kerchiefs to weep into. Because unlike Georgie, yours truly is very emotional, especially when it comes to block buster socialites going to press to stitch a river of emotional sympathy.

But days after the accident that left Georgina — a professional show jumper — hobbling around her upstate horse farm with a cane and zoned out on painkillers, Cheek called it quits.

Yes the audacity. Joey you are a skunk. Don’t you believe in happiness ever after?

“The guy I was totally in love with decided that now would be an appropriate time to break up with me, which took me by surprise,” Georgina said while relaxing in her Nolita penthouse.

“I’m really surprised anyone would be so insensitive as to do it while I am down and out,” she told The Post. “It was pretty shocking, because I thought he was a really nice guy.”

Kids, I don’t know about you but I’m looking for my box of satin kerchiefs to weep into. Because unlike Georgie, yours truly is very emotional, especially when it comes to block buster socialites going to press to stitch a river of emotional sympathy.

“The timing of the break-up makes it harder, because I can’t do anything but sit here, and I was already feeling sorry for myself,” she said.

“Anytime you open up to someone and you choose to trust them and include them in your life, and they turn around and say they don’t want to be part of it — that sucks.”

Georgie, I’m feeling violently sorry for you, but even more if you must know violently sorry for Chuck, sorry Joey. Is this what greeted you Chuck when you would turn to look longingly into Georgie’s eyes? The self pity and passive aggressive innuendo must’ve seeped all over your bowl of morning Cheerio’s.

Here dear, share a corner of my satin kerchief so we can weep together. But please Chuck, no stains, satin is always a bitch to wash out you know.

“I could have seen this going forward, but he didn’t. I think he thought I had trust issues, or that I wasn’t a very nice person, and that we weren’t a good match. At the end of the day, I don’t want to be with someone who doesn’t want to be with me.”

But the optimistic Georgina said she won’t hold a grudge forever. “We’ll probably be friends at some point down the line,” she said.

Yes Georgie, you will always be friends, and please don’t hold a grudge, not in public anyway.

As for dating, “you move on and make the best of it,” she said. “There are plenty of guys out there, and there are worse things in the world than being dumped.”

Georgie when you are ready, feel free to call me, because I’m really one of those guys holding their breath hoping your reflection meets mine.

Don’t you hate getting dumped on in public too?