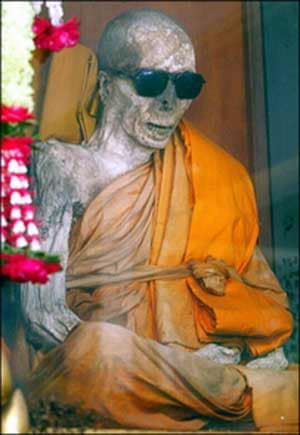 All could’ve been well for one California driver who’d spent ten months ignoring the dead homeless woman rotting in the passenger seat of her vehicle, as officers only found the corpse, reduced to “skin and bones — kind of like a mummy” upon being dispatched to field an unrelated “complaint that [the] 1997 Mercury Marquis was blocking a driveway.” And we thought this kind of thing only happened in movies like Pulp Fiction.

Though at first she tried denying knowledge of the corpse she’d taken on a yearlong joyride, as AOL News reports: “Upon further prodding, [the unnamed driver] told police she had allowed a homeless woman whom she had befriended in December to sleep in her vehicle.”

In the event like us you’re wondering how she endured the stench of the dead women’s body, this is what we coughed up in Gawker: asking the police chief of Costa Mesa, California how the car owner dealt with “the overwhelming stench.” (Answer: Her father regularly pooped in the car, so she was “immune to the smell.”)

As usually happens in these situations, when the homeless woman died, the driver said, “for unknown reasons,” “[she] left [the body] propped up on the passenger seat and continued to drive her vehicle…” Perhaps our driver thought the dead woman would snap out of it she waited longer enough, was just playing Rip van Winkle.

While easy to be snarky (one police investigator expressed relief this didn’t happen closer to Halloween), the question remains of why, exactly, the woman didn’t do anything; why she felt it would’ve been easier to spend the rest of her life sitting next to a decomposing corpse covered by a blanket than to notify the authorities and risk answering a couple questions. Does this not speak to the nature of our driver’s deep seated delusions, her residual psychic repressions, or can one even be bolder to  wonder if her actions don’t mimic that of a greater public in perpetual disillusion and denial of their dizzy lot?

Could it be that the incident was so traumatizing she couldn’t believe it herself and simply went about her usual business, the way schizo does when ignoring his or her hallucinations (or at  least trying)? Moreover, how can we account for the fact that by simply choosing to ignore something so obvious, everyone else did as well until our perpetrator made another, much more minor error?

Which kind of poses the further question: who’s really schizo here? And if she’d simply played by the rules of the road, couldn’t this have gone on indefinitely longer, perhaps forever?