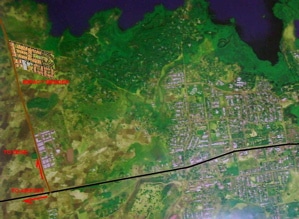 While some Googlers first felt weirded out when Google Voyeur Maps snagged photos of their house, in Brazil, now, Google Street is returning searches with close up images of fresh corpses. This, of course, as news breaks that their CEO, Eric Schmidt, states “Google policy is to get right up to the creepy line and not cross it.”

Google reps refused to comment on exactly how many bodies could be spotted in the reportedly bloody images from a ‘busy’ Rio de Janeiro street, but did say “in a statement Tuesday that ‘all images of the bodies were removed’ from its mapping service.”

Even though taking down the images is something that good taste would surely dictate, doesn’t assaulting our unsuspecting eyeballs with gory spy-cam photos then, as if it had never happened, clearing the evidence from all their records, make it even more creepy, in a way, even ghastly? Which is to wonder, if Google, the most popular portal to accessing all the world’s knowledge, is hiding the mounting evidence of their, well, creepiness from us… isn’t the next logical step to ask what else they may be hiding, albeit more successfully?

All this corporate secrecy should seem all the more startling, seeing as Schmidt, also suggested the following: “If you have something that you don’t want anyone to know, maybe you shouldn’t be doing it in the first place.“  So staunch is he on that point that he has recently suggested kids in the future will have to change their names to ‘escape their Google-able past.’ Of course, Google’s past remains un-Google-able… and probably always will.

But since Google gets do-overs, if only to maintain its corporate tastefulness, wouldn’t good taste also dictate making it as easy to erase our sometimes creepy indiscretions as it is for those with all of the computing power — and wouldn’t the ability to edit our past postings and statements as we saw fit be a grievous assault on public knowledge, on the sanctity of recorded history itself?