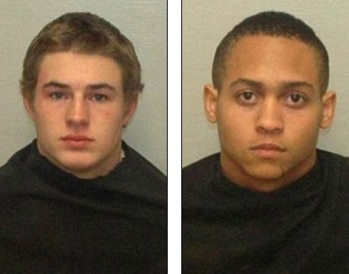 We always balk a bit when hearing that a young person’s life has ended prematurely, but never more than when it’s been done callously, or by someone settled in that social group we so affectionately call the ‘cool kids.’

So when reports filtered in that two  South Florida teenagers, Charles Southern and Connor Pidgen, (pictured above) shot and murdered a ‘trusting’ classmate-Makia Coney ”just to see what it was like to kill,’ it’s no surprise that what the judge appeared to find most shocking can best be betrayed by reading her closing statement to killers:

‘You both conceived this evil plan, and then you carried it out together.

“There was no provocation. You guys certainly weren’t bullied. You weren’t outcasts by any stretch of the imagination. You were the football players, the jocks.”

The gist of which more or less implies we could all be sort-of understanding if they hadn’t been so popular… then they’d at least have motivations, other than utter ennui. Despite preferred hyperbole shouldn’t murder be equally heinous no matter who commits it?

Could it be the court was so affected by more than just the act of murder? That is to say, doesn’t it become something like a betrayal to society itself when we take into account the perpetrator’s good breeding and social standing?

The Daily Mail report states, “The ‘kill for kicks’ plot shocked prosecutors as both boys involved had no criminal record or provocation to carry out the crime” because
“Both boys,” who pleaded guilty to second degree murder, “came from respectable, middle class families and had unblemished records at school.

Is not, I would like to argue, the real shocker here that despite all the crime’s supposed ‘evilness’ the killers only received murder in the second degree, for a killing described both as unprovoked and ‘plotted?’ A punishment that nevertheless netted them 40 years without parole.