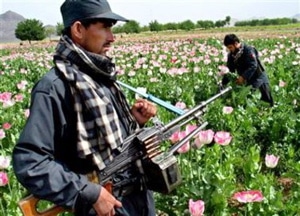 Though at first it seems merely a curiosity (or news only for the addicts) reports that an Afghanistani “poppy eating virus” has tripled drug prices and cut “global opium production..this year nearly by half” could well impact even the cleanest of Americans abroad, as well as us domestics.

Aside from an explanation for why your friendly neighboring needlepoker has become more itchy and aggressive on the subway as of late, the morphine famine could dramatically effect the Afghan War effort for the US.

Russian TV (RT) reports: The heroin-producing harvest is the main source of income for Taliban militants. They retain a stronghold in the drug-rich southern provinces of Afghanistan, despite a massive NATO effort. And the drug issue is effecting the fight against crime and corruption. That’s because…many Afghan police are among the addicts.

While we may at first think a little market scarcity would help stop Afghanistan’s finest from so easily scoring and, instead, set them on the straight and narrow, it appears more likely it will only worsen the the already sensitive situation.

As RT reports, “UN experts warn higher opium prices could persuade Afghan farmers to cultivate even more opium,” even though most of it will be doomed to blight. Perhaps more importantly, that also means sacrificing plots of edibles, like wheat, to risk the farm on fueling the increasingly lucrative demand for drugs.

This example of meeting consumer demand could, however, create a proverbial vicious cycle: as the dope wears off and Afghani cops begin to kick, not only will they grow more desperate for a fix, but also more hungry as they regain their appetites… but with less wheat and, thereby, less bread around to fill their stomachs.

Which means it’s probably only a matter of time before we’re breaking stories about the atrocities committed by strung out, starving cops taking out their hallucinations and frustrations on the everyman farmers who, out of desperation, switched to sowing more opium to get rich quick.

Perhaps it’s just another formative lesson in perils of enduring freedom, but it may also be another sign US troops will still be stuck there for awhile, at the very least to deal with hungry strung out Afghani cops…