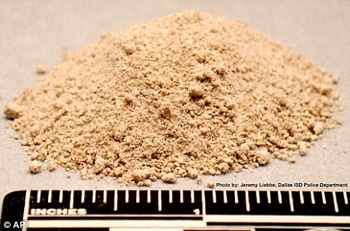 This just in, so hide your kids and lock the doors: a form of ‘starter heroin’ with the tabloid-friendly name “cheese” has left New York “children as young as 12…hopelessly addicted” in what has been called the latest teenage drug craze to “sweep the city.” (And we’d thought they only said those kinds of things in the movies…)

The mixture of, among other things, heroin and cough medicine is usually branded with characters from the Looney Tunes, the Lion King, or with Lady GaGa, and other “child-friendly brands” before being sold (probably behind the swingset) as a cost effective method of enticing schoolchildren into snorting the addictive opiate. Hopes are they’ll build a nasty tolerance to it, and need “increasingly large amounts” to bump at two-bucks-a-pop “between classes.”

While, the heroin content is allegedly around only 8 per cent, as the Daily Mail reports, “once children are hooked they find it incredibly hard to quit – withdrawal symptoms start within six hours meaning addicts have to dose themselves up to 15 times per day.” That means dosing almost as frequently as someone addicted to a daily pack of cigarettes.

The report continues, saying, “The dark twist is that ‘Cheese’ also contains a potentially fatal amount of acetaminophen, a common ingredient in cold medicines like Tylenol, giving rise to its other name – ‘Tylenol With Smack’.”

Which makes this critic wonder why we’re not just saying kids are increasingly using smack and cutting it with whatever other stuff is readily available… kind of like they are themselves.

Isn’t it enough to say that more young kids are using heroin enough to shock us (preferably into some sort of action)?

Perhaps now that it looks like ‘pot’ is becoming legal we in the media need a menace with name from your common kitchen, that’s capable of serially selling click-throughs by using, what else, “extreme hyperbole.”

So, as they said (repeatedly) in those famous commercials from ‘the noughties,’ “Behold, the power of cheese.”

In the interim, our condolences to the parents of the recently deceased 20 children. Unhappy sniffing…