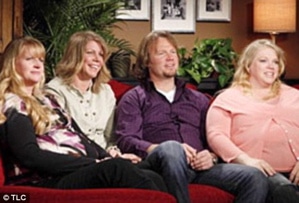 With their Big Love reality spinoff, Sister Wives, the Browns have irrevocably whored exposed themselves by allowing cameras in their home. And, as is usual with all exciting things that happen under pretense of reality, it seems that all their “openness” and “honesty” could result in “big trouble” or jail time for TVs most, ahem, extended family.

The show, slated to reveal the juiciest inner-workings of a ‘real’ ‘integrated family’ “explores the life of Kody, Meri, Janelle and Christine Brown – a husband and his three wives who live together with their combined 13 children” as they try to live a ‘normal’ life in an oppositional American ‘society.’ (It should probably be viewed as a signal of its mass appeal that the premise is almost impossible to write about, much less parse, without the use of ironic quotation marks.)

In response to police reports of an ongoing investigation, the UK Daily Mail reports, “The family instantly came to their own defense and released a statement.

‘We are disappointed in the announcement of an investigation, but when we decided to do this show, we knew there would be risks,’ they countered in their written response.”

And though it doesn’t take a proverbial genius (or a media analyst) to realize that a juicy investigation to help promote their show on television is likely what they’d planned for all along, it’s worth wondering what’s at stake here…

Isn’t this just another a signal that the media, especially the reality based media, is now using law enforcement as a tool to forward its own promotional agenda?

The family admits as much, and continues in their statement, that though they ‘knew’ the risk, ‘for the sake of our family, and most importantly, our kids, we felt it was a risk worth taking.’

But I suppose this what you have to do when you can’t afford to feed thirteen children and you’re too average-looking or religious to turn to making octo-porn… Still, is it any less an act of media-whoring?