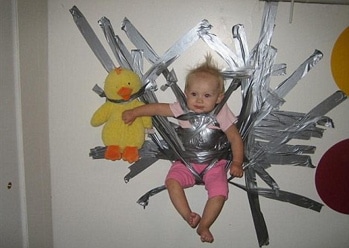 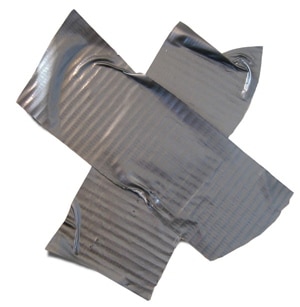 Parents have always adored taking embarrassing pictures of their children while they can still physically overpower them. It provides mommy with material sometimes for blackmail and, if more commonly, to show dates when once the kids grow older as a method for enjoying absolute parental power once again, though vicariously. But is there a point where the typical kind of painfully cutesy gaggling and ogling, becomes too much, even criminal?

Teenage mother Jayla Hamm, 18, has been sentenced to ten days in jail and two years probation after she and her 19 year old boyfriend, Corde Honea, took images of her 22-month year old toddler duct taped to a wall, crying, “for their entertainment, not to discipline him,” the UK Daily Mail Reports.  (Because that would have been a valid excuse, of course.)

The crime appears to be copycat in nature (like so many these days seem to) and taken in response to a similarly composed viral image of a duct taped toddler that’s been making all the usual rounds on social networks and anonymous image boards.

I know, I know, we’ve all seen much worse on internet; and, reports say “The strips of duct tape were over his clothes but did not make contact with his skin”… making it, in some ways, just about as heinous as the average parent-toddler photo opportunity. (You know, like that prototypical embarrassing polaroid of you naked with your twin brother in a bathtub wearing matching green-striped top-hats and holding onto banana while playing with a rubber ducky.)

But If you’re not yet physically distressed our dear judge will tell you why you should be.

‘What makes it shocking in particular is there’s an expectation that it’s a matter of common sense that a parent would protect her child from humiliation and abuse.’

What our judge doesn’t realize, however, is just how far he is behind the times. Both judging the situation at hand as in any way shocking, and asserting the old ideal of ‘common sense’ display a marked, if unfortunate ignorance the electronic world smothering us.

This is internet culture, American culture undergoing its own the High Renaissance of of media whoring: ‘humiliation and abuse’ are its currency, its best and brightest badges pride. Perhaps, we could say, these parents are starting their kid off right for success in what we like to call ‘the real world.’

Could it be this trend is only just beginning.” Last we check on Twitter, only the story seemed to be trending… but that could change at any moment, or if Justin Bieber Tweets about it.