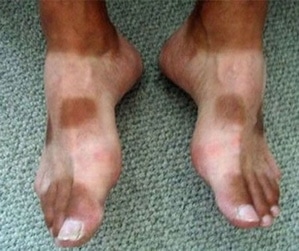 How to get caught by the opposition.

For years Víctor Julio Suárez otherwise also known as Jorge Briceño Suárez aka Mono Jojoy has been a thorn in the Columbian government’s side. As a revolutionary (supposedly) using narcotics to fund his oppressive missions, Suarez was unbeatable. Having killed thousands and maintained an elusive countenance by hiding in the thick Columbian foliage he was able to elude authorities for years until this Thursday. Why? How? Let’s find out…

Gizmodo: He suffered from diabetes which, combined with the rigors of the life in the jungle, had caused painful injuries on his feet. That was the reason why he had to order a new pair of special boots. And that was when Operation Sodoma started and his death begun.

The guerrilla command sent a message asking for these special boots, which was caught by Colombian intelligence. The Colombians were able to intercept the boots and rig one of them with GPS circuitry. When Mono got them, his fate was sealed.

Can you imagine yourself sitting in a dark theater now as your favorite actor finally snags the evil foe while your other favorite actor unwittingly tends to the constraints of his humanity – his bad feet.

The Colombians made sure that he got the boots and started to track the GPS signal. They knew exactly where he was, and that’s when they decided to launch the attack against the base.

57 aircraft, jetfighter and helicopters, attacked the complex with fifty bombs, preparing the way for the Colombian ground troops, who took over the camp with little opposition. In fact, only one of their explosives-sniffing dog died in the attack.

And as the movie credits begin to roll now that the movie is over you suddenly realize as you walk out onto the street, that even though one terrorist is gone and your favorite action hero actors have saved the day again, the world is still as wretched, unjust, haphazard and probably right this minute brooding another terrorist…