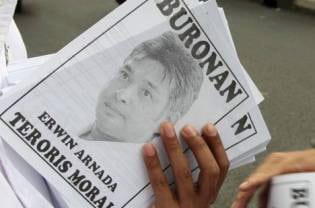 If publishing tasteful pornographic smut in America wasn’t fun hard enough, be thankful that you’re not in Indonesia: reports today state that Erwin Arnada, editor of Indonesian Playboy, has been forced into hiding after being found guilty recently of (you guessed it) indecency.

Herald Sun: Prosecutors twice summoned Mr Arnada to serve his sentence after the Supreme Court overturned his acquittal in a lower court and sentenced him to two years in jail last month.

He was ordered to appear today however, his lawyer Todung Mulya Lubis said the conviction contravened press freedom and the spirit of democracy.

“This is a very important case. It is not simply about Playboy magazine, it’s about press freedom, the pillar of democracy in Indonesia,” he said.

But the question remains whether Arnada is being targeted for the content he published or the name “Press Council member Uni Lubis said it reviewed the magazine in 2006 “from cover to cover” and found “no violation to the journalistic code of ethics…” even by Indonesian standards. he published it under, as the Jakarta Globe reports,

Despite a New York Times report that “The first two issues of 100,000 copies each sold out briskly, even at the relatively stiff price of $3.80,” it almost appears from these reports that no one, at least those so busy on the offensive, have much bothered reading gawking at Indonesian Playboy at all before drawing their conclusions.

The Jakarta Globe report continues, Maybe it was so decent that it failed to sell,” [Arnada] said. “We must be objective and regard the magazine as a journalistic product judged by its content, not by its name.”

Only one thing is certain and proven time and time again: unfortunate though it may be, once we begin censoring sexuality — especially under moral grounds — freedom of expression is never far behind.