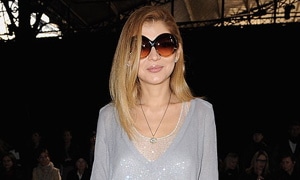 Although the cliched terms ‘suffer for fashion’ and ‘fashion nazi’ have often been abused, one designer showing in New York this Fashion Week has, somehow, made them seem uncannily appropriate. And, being tabloid hacks, who are we to fight it? So go grab your Castro Hat, shave in your hipster Hitler-stache, and pull our your diamond studded Gaga whip so we can gawk with mouths agape at fashion’s newest (and most brutal) dictatorship to date…

Gawker: Gulnara Karimova is the designer of Guli, a line of clothing that uses traditional fabrics from Uzbekistan, the same country that’s been ruled by her father, Islam Karimov, since 1990. Karimov—who’s been called one of the world’s worst dictators  on more than one occasion—has been accused over the years of the systematic torture of the population (including boiling people alive), censoring the press, and holding rigged elections designed to keep him and his friends in power. Not the typical pedigree for a fashion designer, clearly.

But not that far off either, we could well imagine. Besides, what better way than the bloody torture and the threat of violent death to ensure your garments’ quality?

More surprising than the show itself, nobody seems to see that this amounts to just one more US-supported human rights abuse aimed at aiding the Karimovs despite their tyrannic behavior.

One 2005 report from the Asia Times is representative of the tenor of the US-Karimov accusations:

Asia Times: Uzbekistan dictator Islam Karimov’s army, which last Friday opened fire on thousands of unarmed protesters in Andijan, in the Ferghana Valley, has been showered by Washington in the past few years with hundreds of millions of dollars (US$200 million in 2002 alone) – all on behalf of the “war on terror”.

If we ignore the profound perversion that Karimov — who has been compared to Tamerlane (a historical dictator of the region who’s famous for constructing pyramids out of his enemies skulls) — uses constant terror and the threat of torture to fuel what is ostensibly a ‘war’ on just such tactics, it becomes more than clear why the US is so eager to support him:“the Karimov system regards any kind of opposition as ‘terrorism.’” What about fashion writers? Terrorists for sure, Herr Karimov, that’s for certain.

Gulnara, an astute rising dictatress/fashion nazi, who, The Asia Times reported “practically owns the country” has learned well from her father about the power of contradiction, and constructed a fashion line of “multicolored, almost hippie-inspired looks for both men and women.”

Could there be a better business model than utilizing slave labor (probably), and torture (definitely) to sell rich Americans clothing designed to capitalize on our nostalgia for the dated ideals of ‘peace and love’…?