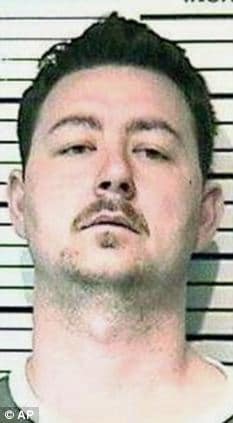 Be wary in that cafe around you – could you, as you’re reading this, be surrounded by potentially psychotic ‘caffeine killers?’

We’ve all felt a little crazy jittery after three (or four) espressos and no sleep while stumbling all groggy on a tight work deadline, or maybe while cramming for a test that could like totally end our lives, but could three cups really be enough of the gooey brown stuff to induce the type of temporary paranoid psychosis required to, um, kill your spouse? OK then, let’s calm down and more carefully examine the question after first swallowing a handful a Valium…

Woody Smith, 33, who strangled his wife with (get this) a power cable, after ingesting some sodas and diet pills totaling roughly 300mg of caffeine – said to be about three standard cups of coffee –  says yes to our quandary, and is currently using caffeine intoxication as his basis for pleading insanity.

UK Daily Mail: In the weeks preceding the murder, Smith told Dr. Robert Noelker, a psychologist from Williamstown hired by the defence, that he hadn’t been sleeping, in part out of fear his wife would take their two children and leave him.

Though there may well be extenuating circumstances at play here, how can we account for the glaring fact that Smith executed his significant other with an electric cable and, hence, set himself up for every one of the most tongue-in-cheek tabloid news jokes possible?

If this isn’t premeditated media whoring masochism of the first and most blatant degree conceivable then I myself must have downed one too many double espressos and jolted myself into an entirely alternate reality.

Which begs ‘who in their right mind would hurl themselves headfirst into such an appropriately ironic situation?’ Wouldn’t any yawning jury think, almost immediately, that the man must be Chock Full o’Nuts? And doesn’t that seem to be exactly Smith’s point… or am I just too busy buzzing to really take notice of Woody’s obvious craziness?

Do Mr. Smith’s actions seem premeditated by the fact that he managed so successfully to plug himself into our collective media machine by virtue of creating such an absurd situation that we were almost universally forced to inadvertently support his insanity defense by having to be too being quick and quick-witted to slander his sanity? (there’s only so many clever coffee and cable jokes, you know, and no one wants to miss them.)

Perhaps the only remaining question is one of whether this is a story we could possibly grow tired of…. Of course, the power of his scheme could suffer from a failure as soon we all start clamoring to shock him to death for the sake of ‘poetic justice.’