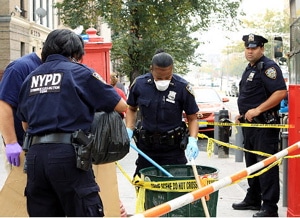 Police suspect a possible suicide in the case of Cesar Mercado, the Nicaracguan diplomat found in his ‘blood-splattered’ Bronx apartment in light of breaking reports that he had been ‘down and out’ after a recent HIV diagnosis.

Investigators found Mercado fully clothed with except for his shoes, covered in blood and sporting a number of nicks on his neck, including deeper wounds believed fatal, along with twelve cuts on his abdomen.

NY Daily: The knife wounds to the neck and stomach of Consul Cesar Mercado included a number of pinprick-size punctures. One investigator described them as “hesitation wounds – where you’re trying to see how painful it is.”

Reports of Mercado’s death, it would be fair to say, were far from shocking, at least when first reported. Although unfortunate, it did happen in the Bronx instead of the Upper East Side; and unless a celebrity or heiress had a part in it, no one really sells papers in New York by sporting even a flashier murder headline.

But now with not only HIV being thrown around, but also a possible suicide, we’ve found ourselves sitting on all the trappings required to transform a tragedy into a trashy tabloid tell-all just in time to make the evening deadline.

Which, perhaps, should leave us wondering whether we’re dealing with something genuinely shocking, or if it’s all just wishful thinking. There’s a disconnect without a doubt, which, in either case, gives us all some trash to talk about.

For example, Friends of Mercado refused to believe the well-liked 34-year-old diplomat took his own life.

“It was an animal, whoever did this,” said Mercado’s friend Amparo Amador. “He didn’t kill himself. It’s a real tragedy.”

Such claims would seem to be backed up by circumstantial evidence such as clumps of hair found in Mercado’s hands which, police say, could well be indicators of a struggle.

Moreover, the discovery two knives, believed to be the murder weapons in the bathroom sink appear to make suicide seem, in this jaded hack’s opinion, more unlikely. We can, at least, still hope the murderer was a gay lover, as our friends the New York Gutter Post suggested.