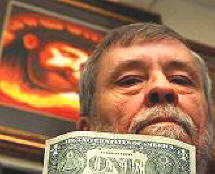 A Zion, Illinois man is going to biblical proportions to change his name, literally.

Steve Kreuscher, 59, must not really be sure why he keeps changing his name; especially because he cannot keep his answers straight with different media. His primary rationale for the switch was for God. Or maybe it was Jesus, sometimes it was both. Oh, hell, if he doesn’t know, why should we?

I guess we should cut him a break, however, because, who wouldn’t be mixed up going by the Steve, then by “In God We Trust,” and now “One
Nation under God?”  But if he is mixed up now, it’s bound to get even stickier, as he will be continuing the trend of changing his name every two years until his list of seven names in complete.

Huffington Post: Under God isn’t done with name changes, either. In fact, he plans on five more, to be spaced out in two-year intervals.

Up next is Seven Seven Seven, a numeric series of some significance to Christians. What Would Jesus Do and No Cross No Crown are also on the list, as are the more colorful Thermado Zattersof and Angelico Zioneero, according to the Tribune. The Sun-Times gives the latter as
Andgelical.

What is most bizarre is that while some people still call him Steve, many oblige his named changing charade. His boss had no problem calling him “In God We Trust,” and Kreuscher anticipates him now switching over to “One Nation under God.”

I’m sure his boss is happy to oblige by dropping the Steve’s previous names from the list; especially when it would result in Steve “In God We Trust One Nation under God Seven Seven Seven What Would Jesus Do No Cross No Crown Thermado Zattersof Angelico Zioneero”  Kreuscher.

Maybe it’s time that Steve puts down the bible and picks up a copy of Romeo and Juliet, hasn’t he ever heard Juliet’s soliloquy “What’s in a name?” He’s still got time. Somebody should be kind enough to loan him their copy, it may save him ten more years of this absurdity.