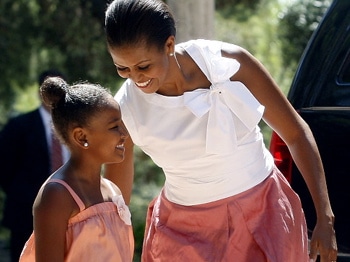 Michelle Obama has quickly fallen from grace as outrage over her recent trip to Spain still continues to cause the first lady controversy; and is now the newly dubbed “modern day Marie Antoinette”; it’s interesting how quickly loyal subjects are start to cry foul. Not enough change, America?

Mrs. Obama, her 9 year old daughter Sasha, and a few close friends returned Sunday from Spain to a barrage of criticism from American’s who are angry, believing Mrs. Obama is taking advantage of her position as queen of the free world; living luxuriously while most American’s are suffering from the recession.

While most American’s can’t afford to take a summer vacation; critics of the first lady believe that (even though the Obama’s paid for her vacation personally), that exorbitant costs, like a Costa del Sol hotel room costing $2,500, are outrageous. And it’s showing in the polls.

NY Daily News: According to the Wall Street Journal/NBC News poll, just 50% have a positive impression of her — compared to 64% who answered favorably in a similar April 2009 poll.

According to the Washington Examiner, Mrs. Obama’s popularity is now even lower than former First Lady Laura Bush was at its lowest. A 2001 poll by the same pollsters revealed 76% had a positive impression of Laura Bush. Even in October 2006, when her husband’s ratings were dismal, the then-First Lady enjoyed an approval rating of 56% – higher than Michelle Obama’s current numbers.

One has to remember even though Laura Bush (Mrs Obama’s predecessor) wasn’t trying to make the splash that Michelle Obama has, one still has to wonder isn’t being first lady about creating a little controversy?

Promoting literacy and education, and dressing like an Avon Lady, was never going to ruffle too many feathers. Plus, her husband caused enough snafus for the both of them.

Maybe Laura could recommend a book about the social etiquette of being a celebrity.  Speidi’s “How to be Famous,” perhaps?