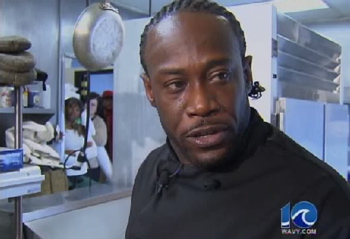 Getting high in the kitchen.

Chef Fred has been living it large for the last 10 years and if the FBI hadn’t finally nabbed him today Chef Fred would be packing another pound of cocaine alongside your fried chicken right about now. But that was yesterday. Chef Fred is now after long term surveillance going to the big clinker.

Gawker: Turns out that Virginia Beach’s Big Daddy’s: A Touch of the South was serving more than just soul food! After keeping a close eye on him for almost ten years, federal agents arrested Fred Wills, Jr., aka “Big Daddy,” the restaurant’s chef/owner on Friday, charging him with running a $9 million drug ring involving cocaine and marijuana spanning four states.

The 26-page federal indictment lists a series of ever-escalating drug deals dating back to 2002. The DEA alleges that Wills, his wife, and a co-conpirator sold over 240 pounds of cocaine and laundered money through the various restaurants Fred Wills has owned over the past eight years under the “Big Daddy” name. At one point they even “distributed one kilogram of cocaine in a Styrofoam take-out food container” for $23,000.

Which makes us wonder, do you only arrest someone with intent to deal once they are reasoned to be using more than 240 pounds? Because personally we know some folk that can whiff up a pound or two of the good shit easy. But after the 4th or fifth foams of froth are likely to develop around their throats. So maybe that’s it- the Feds were just waiting for Chef Fred’s lips to start foaming the way Lilo’s normally foam when she gets to work.

Wavy.com; In a federal indictment , agents said Wills, along with his wife and a third suspect, sold cocaine, crack and marijuana, many times serving the drugs up in white Styrafoam take-out food containers. Agents say Wills laundered the drug proceeds through his restaurants and other businesses and referred to cocaine as “food.”

So a fried leg would be a dime. A breast 2 nickels and half a chicken 5 bags. Why didn’t we think of this?

‘Now that the chef has been arrested, federal prosecutors are asking that if he is convicted, Wills be forced to forfeit more than $9 million worth of property and assets allegedly bought with drug money.

Mmh. Ain’t life a bitch! Just when Chef Fred was getting round to dessert the feds had to pull his game apart…

Just in case you’re curious as to how Chef Fred got his amazing ideas from we’ll leave you with this.

Eater.com Wills also revealed that he was no stranger to crime: before running restaurants, he served “close to 16 years” in jail for armed robbery. After getting released, he got a job washing dishes and worked his way up, all the way to philanthropic kingpin.

Isn’t life amazing? I think we’ll have a whole chicken to go thanks…