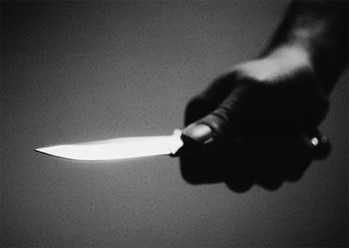 Why it sometime doesn’t pay to be a big time celebrity.

One day you’re sipping margaritas with billionaires in St Remo the next you’re fending off crackheads with sharp knives. Welcome to Parasite Hilton’s very scary life…

NY Post:LOS ANGELES – Paris Hilton tweeted this morning that a man carrying “two knives” tried to break into her home, but the police was quick to arrest him.

“So Scary, just got woken up to a guy trying to break into my house holding 2 big knifes,” Hilton wrote on her Twitter account. “Cops are here arresting [him].”

TMZ.com reported that law enforcement officials confirmed that a man in his 40s was arrested at Hilton’s home around 6:45 a.m. He was hauled off to a local jail.

Paris told cops the man, who has not been identified, was banging on the windows of the home — but never actually entered the place.

Kids, I don’t know about you, but I’ve got beads of perspiration running down my waxed back. God forbid someone take our national treasure away from us. I couldn’t possibly think who could fill Parasite’s valuable role in society as a verifiable A grade media whore.

“What a scary sight to wake up to,” she said in an interview with RadarOnline.com. “I can’t believe the knives he was carrying. Thank god the police arrived quickly.”

Perhaps they even came too quickly if you catch our drift…

Hilton’s publicit said in a statement. “The security cameras and alarm system were alerted and the police immediately came to the house and arrested the intruder who was attempting to break a window when they arrived. Paris is naturally shaken by the events but is unharmed and well. She is very thankful to her security team and the police for their swift and diligent response.”

One day when Parasite least expects it one of her socialite friends will walk into her room with 2 large sharp knives, but only it wont be a joke. Let’s hope the police save our angel then…