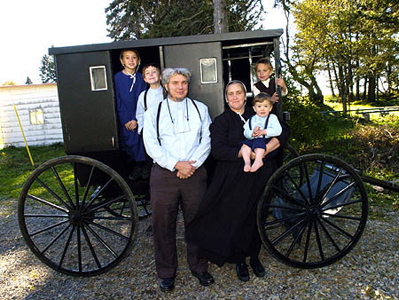 Living the first twenty-four years of my life in Central Pennsylvania, seeing Amish people, is a common occurrence. They’re at farmer’s markets, some sects of Amish are at Wal*Mart on a Saturday afternoon, and occasionally you have to slow down your car on the high way to let their buggies pass by.  For anyone that has never seen them, the men bearded the women bonneted; they’re a strange sight, but maybe not for long. With their rapidly growing communities, the Amish are seeking to move up and out of their strongholds, and branch out across the United States, and even surrounding countries.

The Amish have settled in 28 states and Ontario, seeking affordable, fertile farm land, and have also began looking to settle in Mexico and Alaska.  While most Amish still live in the Pennsylvania, Ohio, and Indiana, they are now settling down in New York, Minnesota, Missouri, and Illinois. Known for the expert farming skills, the Amish continue their antiquated lifestyle in their new communities; building barns, setting up markets and bake sales, and foraging their livestock.

Professor Don Kraybill of Elizabethown College in Pennsylvania says, “They are sort of challenging some of the mainstream assumptions about progress and how you achieve the good life and happiness. They’re not merely surviving; they’re thriving, and growing at this very rapid rate.”

In other words, they reproduce like rabbits (because, really, besides till the soil, what do they have to do?) So don’t worry if you haven’t seen the Amish yet; there’s a horse and buggy headed towards your neighborhood very soon.