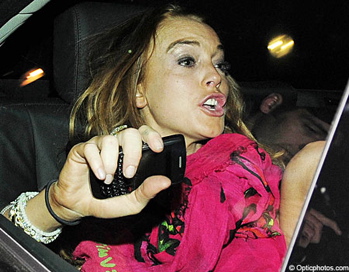 Moved to isolation for her own good.

Oops. Looks like Lilo is not having a good time in jail. Apparently according to news.com.au Lilo is having a nasty time of it. How nasty do you wonder? Let’s step aside and let our prison guard open the door to Lilo’s isolation cell.

News.com.au: FALLEN star Lindsay Lohan was in lockdown after having a “hysterical fit” in front of her fellow Los Angeles County jail inmates, British media has reported.

The 24-year-old allegedly broke down in tears after prisoners at the Lynwood women’s prison chanted “fire crotch” at her, referring to the Mean Girls actress’ frequent sexual escapades, the Daily Mirror reported.

“Lindsay would lie there shivering all night, crying and covering her face with her hands. Her wailing was keeping everyone awake …. She had a hysterical fit, crying and yelling, so she got put in isolation,” said Cheryl Presser, who was released from the jail on Friday night.

Ohh. Can we all hold hands and sing koomba ya my lord? How can these heathen continue to mistreat our Lilo? Don’t they realize who she is and how lucky they should have her lodging with them? Apparently not. The report continues…

It was understood Lohan was briefly admitted to a nearby medical center to be checked over, amid media reports on  Friday that she was self-harming.

Prison officials were quoted by the newspaper as saying they were worried about a number of scratches on her arms and were monitoring her 24 hours a day.

Self harming? Did Lilo find Dina’s Carvel ice cream cones and try scraping them against her wrists? Is this Lilo’s little clever way of being the girl that cried wolf just so she can maintain her 24/7 media attention? Or is Lilo really feeling the pangs of her deceit suddenly? Or better still is she going slightly batty that she’s not on some yacht this summer sucking up as much dry soap flakes that crumble off the ship mast?

However, it was expected she would serve just 14 days due to prison overcrowding. The Sun newspaper even suggested she might only serve nine days.

Lilo, I promise you, once you get out the middle of next week we go and hang out and look at a bar of soap together and try to figure how to snort the whole thing whole. Let’s see if the tears start then.